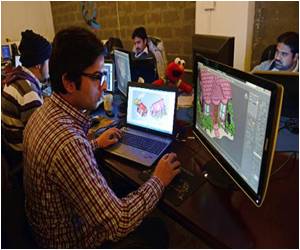 Following the success of Netflix and a fresh push by Amazon in online video, the battle of the tech giants is now moving into television with Microsoft, Yahoo and AOL.

These moves come as a growing number of consumers are turning away from traditional television to online services such as Netflix, and with those providers looking to draw viewers by offering new, and not just recycled programs.

Inspired by Netflix's "House of Cards," a blockbuster with a reported investment of $100 million, Yahoo is seeking writers and producers for four comedy programs with per episode budgets of at least $700,000, according to The Wall Street Journal.


Microsoft is also moving toward original content that can be streamed through its Xbox consoles, starting with a series produced by Steven Spielberg based on the popular "Halo" video game.
Advertisement
A new science fiction series, "Humans," coproduced by Britain's Channel 4, is expected to debut in 2015 for Xbox viewers.

"We have been overwhelmed by the interest we've received from the creative community to collaborate with us on developing unique, compelling story-telling experiences for the Xbox community," Microsoft said.

Amazon, which has already seen some success with its "Alpha House," program, is now making an all-out push to expand its original offerings to ramp up its challenge to Netflix and Hulu, which also produces original programs.

Amazon has given the green light to six new original programs, including a drama produced by X-Files creator Chris Carter called "The After" and a comedy with actors Gael Garcia Bernal and Malcolm McDowell, "Mozart in the Jungle."

A new device for streaming to television sets, called Amazon Fire TV, may further help Amazon in its bid to draw viewers.

The company said this week that the number of its video streams tripled year over year, overtaking both Apple and Hulu in streaming video usage.

"We've invested hundreds of millions of dollars in great TV shows and movies for Prime members and it's working," said Bill Carr, Amazon's vice president for digital video and music.

Sony is getting in on the act as well, in a move that seems to undercut its Hollywood studio operations. The company's PlayStation Network is commissioning its first original drama series called "Powers," based on a comic book of the same name, combining the genres of superhero fantasy, crime noir and police drama.

AOL, looking to find a new niche, is extending four original programs, including one on the world of ballet in New York produced by actress Sarah Jessica Parker.

"The success these series have seen is on par with top-tier cable programs reaching sizable audiences who are highly engaged, making them incredibly attractive for advertisers and establishing a viable alternative to place dollars," says Charles Gabriel, an AOL executive for global video sales.

"We have seen a strong response from top brands looking to reach consumers they may be missing on TV."

Analysts say the potential ad revenues are also being eyed by Yahoo, which had to abandon a bid for the video website Dailymotion.

Google is a major player in streaming through its YouTube unit. But instead of producing shows on its own, YouTube allows others to create their own channels. Because of this, Google gets the largest share on online video ad dollars, or 20.4 percent of the total, according to research firm eMarketer.

The big tech firms may be able to capture ad dollars if they have the right content, according to a report by Pivotal Research.

"Advertisers are willing to spend more significant budgets intended for TV on online video, but they need comparable quality content," the analysts said.

"Real TV dollars have not moved to online video in any meaningful way largely because content from digital media companies has not been comparable (in the eyes of an advertiser) to that which is produced by a traditional media company."

Fear of Losing may Make Video Gamers Aggressive
It is not how violent or non-violent a game is, but the feelings of failure or frustration arising ....