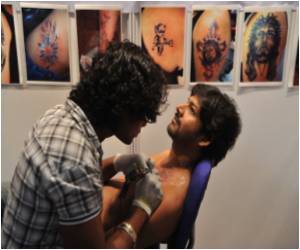 Girish Giridhara's arms are tattooed with Hindu gods, goddesses and sacred mantras. The spiritual designs are intricate but also hardly surprising for a man who once trained to be a priest.

Shaven-headed, with gold earrings and a red tilak on his forehead, the 36-year-old tattoo artist looks relaxed in a sleeveless t-shirt, knee-length shorts and flip-flops at the Indian Ink tattoo convention.

Ma Htwe recalled the day of agony she suffered, more than five decades ago, when her face was etched with the intricate tattoo that still lines her papery skin like a spider's web.
Advertisement

The exhibition in Mumbai this weekend is billed as India's first, with organisers hoping to tap into a growing interest in permanent body art among young Indians.


But Girish, an exhibitor at the event, knows that body art in India is not a new trend set by cricketers or movie stars.

Tattooing has been an integral part of Indian tribal culture for centuries and no Hindu wedding is complete without the mehndi ceremony, where the bride's hands and feet are elaborately decorated in non-permanent henna.

Tattoo Rage in Australia Among the Young

One out of four youngsters in Australia seems to sport a tattoo, and it is fast becoming a fashion statement.
Advertisement
"It (tattooing) is documented in the Vedas (scriptures) from the time of (the Hindu epic) The Mahabarahata. Lord Krishna had a tattoo done for his queen," said Girish, who runs the Bramha Tattoo Studio in Bangalore.

"It's been around for a long time, then it disappeared for some reason. Now it's come back," he told AFP.

Reality television shows like "LA Ink" -- about tattoo artists and their clients in Los Angeles -- have helped changed the modern mindset towards tattoos in India, he said.

"About five years back people didn't want to go for tattoos. They used think it was only for junkies. People are more open-minded now. It's now being seen in a very good light."

That change has also influenced designs, with previously popular Western and Japanese art making way for styles reflecting India's rich and varied artistic, religious and cultural heritage and as a form of identity and self-expression.

Girish's route into tattooing was unconventional. He comes from a family of Hindu priests and studied in temples between the age of eight and 15 to become one himself.

He first became interested in body art aged eight, around the time of his threading ceremony -- an initiation rite among upper-caste Hindu males to signify adult religious responsibilities -- and developed his skills.

"There was a lot of opposition in my family (to him becoming a tattoo artist)," he said.

"But we asked the scholars and they said tattooing can be taken as an occupation by a priest if it involves spiritual guidance and medicinal use. So, I started tattooing."

Even though he may not be a practising priest in saffron robes, Girish still sees a divine element to his work.

A tattoo, he says, is carried with the soul after death and is a connection to the body's past in the journey of reincarnation.

He has also set himself a target of tattooing 10,000 people with the sacred Hindu syllable "om", which he pays for himself.

The sideline also allows him to educate the public about the dangers of getting cheap tattoos with unclean materials from untrained artists.

"It's very dangerous," said Girish. "They can spread hepatitis, HIV and skin diseases. It (tattooing) needs to be safe and knowledge is very important."

The sentiments chime with those of the convention organisers, who want to raise public awareness about how to get tattoos safely as well as the profile of the country's most talented artists.

Co-organiser Shibhanii Shah, a 25-year-old photographer and artist, said there were some 100,000 tattoo artists in India, demonstrating the potential for development.

But she added: "We don't have any rules on hygiene and that's quite disappointing. India needs to get that level where we can show our talent and be as good and as safe a place as anywhere in the world to get a tattoo."