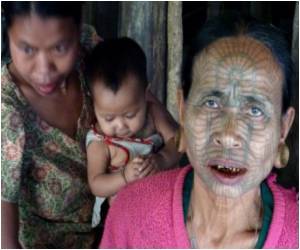 Ma Htwe recalled the day of agony she suffered, more than five decades ago, when her face was etched with the intricate tattoo that still lines her papery skin like a spider's web.

"When they tattooed my eyelids I thought that they would disappear," she said, chewing pensively on betel nut. "I wanted to run away."

Tattoo Rage in Australia Among the Young

One out of four youngsters in Australia seems to sport a tattoo, and it is fast becoming a fashion statement.
Advertisement

The 65-year-old was one of the last in her village to undergo the facial inking -- once a rite of passage for young ethnic minority Chin women in the remote northwest of military-dominated Myanmar.


With the practice ceasing about two generations ago, Ma Htwe is among a smattering of women left alive who bear the tattoos. When they die, the ancient tradition will die with them.

Mysterious circle tattoos on a Peruvian mummy contained burned plant material-a feat that sheds light on a possible ancient healing practice
Advertisement
In the meantime, the vanishing custom has turned her sleepy village, nestled on the banks of the Lemro River just outside Chin state, into a tourist attraction.

"These women are the last of their kind," said Jens Uwe Parkitny, a German photographer and writer who has documented the tradition among different Chin groups over the past ten years.

The ritual was officially banned by the then socialist regime in the 1960s, and the tattoos became increasingly rare as Christian missionaries converted the previously animist communities, said Chin pastor Shwekey Hoipang.

"The Chin girls do not want to get tattoos anymore, because they don't feel this is beautiful decoration," added Hoipang, who is currently studying in the UK.

According to one legend, the tattooing emerged as a way to "uglify" Chin women and protect them from predatory Burmese kings -- but Parkitny is not convinced, given that the practice was once widespread in Asia.

"It is likely that the story was fabricated in more recent times by those representing a 'civilized world' view, which perceives a facial tattoo as defacing and ugly," he said.

The women themselves say the marks were a stamp of womanhood and attractiveness: Ma Sein, another villager now aged 60, was just seven when she started to pester her parents for her own tattoo.

"I thought it was beautiful," she told AFP.

Little did she realise then that it would also prove lucrative.

A couple of hours downstream in the town of Mrauk U, tour guides now offer regular boat trips along the Lemro to visit the women's isolated settlements.

Curious travellers are drawn to see the striking Chin faces as they are to the "long-necked" women of Myanmar's ethnic Padaung tribe, so-called for their tradition of adorning and stretching female necks with brass rings.

Fascination with the Padaung, based both in Myanmar and across the border in Thailand, has generated income but also an ethical debate: critics denounce the ongoing restrictive practice and the phenomenon of "human zoos".

But while younger generations of Padaung women continue to wear the disfiguring brass rings to earn money by posing for photographs, Chin girls no longer go through their grandmothers' painful tattooing experience.

Aware their days are numbered, the unusual-looking elders are embracing the outside interest in their lives, having struggled to get by on traditional income sources of farming and logging.

"Late in life they are using their unique and soon-to-disappear looks as a way of earning money for the betterment of their impoverished communities," said Simon Richmond, a researcher for the Lonely Planet guidebook to Myanmar.

The number of visitors they receive is still relatively low: even the day-trip starting point of Mrauk U, in western Rakhine state, receives just a few thousand travellers a year.

Nevertheless, tourists' donations have helped especially to maintain local schools, after years of neglect towards the villages by "what passes for government in Myanmar," Richmond said.

Many have shunned Myanmar because of its undemocratic record -- the army has ruled with an iron fist for almost half a century and widespread human rights abuses have been reported, particularly against minorities such as the Chin.

After a widely panned election in November, few signs of political change are evident in the secluded villages of the northwest, but one likely outcome is a gradual opening up of Myanmar and a rise in visitor numbers.

As one of the last to carry her tribe's unique heritage, Ma Sein is happy to welcome all those who do venture to see it, while she still can.

"Sometimes I feel like my parents' spirits are coming back to me through the visitors," she said, as she waved goodbye to the latest group of tourists.

Pakistan Gives in to the Tattoo Rage

A tattoo artist has revealed that there is a new rage sweeping across Pakistan and it has to do with the body art.
Advertisement
<< Inactive Protein May Actually Play a Crucial Role in Pathog...
More Than 1 in 10 Nuke Plants Worldwide Siting on Natural D... >>

Calculate Ideal Weight for Infants A-Z Drug Brands in India Drug Side Effects Calculator Loram (2 mg) (Lorazepam) Selfie Addiction Calculator Drug - Food Interactions Vent Forte (Theophylline) The Essence of Yoga Blood Pressure Calculator Diaphragmatic Hernia
This site uses cookies to deliver our services.By using our site, you acknowledge that you have read and understand our Cookie Policy, Privacy Policy, and our Terms of Use  Ok, Got it. Close
×