Tart Cherry juice could be the new sports drink for cyclists who are preparing for race day as it could give them an edge in recovery. A new study published in Applied Physiology, Nutrition, and Metabolism found that Montmorency tart cherry juice helped accelerate recovery, maintain muscle function and reduce certain markers of exercise-induced inflammation among a group of cyclists participating in a simulated road race.

The research team, led by Glyn Howatson and Phillip G. Bell at Northumbria University in the U.K., conducted this double-blind, placebo-controlled study to identify the effects of Montmorency tart cherry juice on recovery from a metabolically challenging exercise: prolonged, high-intensity cycling. The study involved 16 well-trained male cyclists who were divided into two groups: one group consumed Montmorency tart cherry juice and the other group drank a placebo that contained an equal amount of carbohydrates.


The fifth day of the study involved a 109-minute cycling trial designed to replicate a road race. The two groups were monitored after the race by assessing the blood for specific markers of physiological stress that helps evaluate the body's ability to recover. The cyclists in the Montmorency tart cherry group maintained muscle function (as measured by maximum voluntary isometric contraction) and experienced a reduction in certain inflammatory responses following the simulated cycling race, compared to those consuming the placebo drink. The tart cherry juice also appeared to maintain exercise efficiency, reducing the amount of oxygen muscles need to do work. The VO-2 (maximal oxygen consumption) values were 4% lower at 24 hours compared to the placebo group.

To help assess dietary compliance, participants kept food diaries and were required to adhere to a low-polyphenolic diet that eliminated fruits, vegetables, tea, coffee, alcohol, chocolate and whole grains for the duration of the study.

The authors conclude that this new study adds to the growing body of evidence providing support for the use of Montmorency tart cherry juice in exercise recovery. Given the existing research - among cyclists and marathon runners - they suggest future work should explore the potential benefits from strenuous exercises that are both metabolically and mechanically challenging, such as football, hockey and court sports.

Sports Drinks  Do They Help Athletes Perform Better?
Sports drinks help sportspersons to refill the electrolytes they lose from their body during sports and games. The glucose content in them helps to prevent fatigue and enhance their performance.
READ MORE 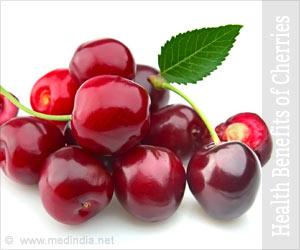 Health Benefits of Cherries
Find out the nutritional facts and the health benefits of cherries, cherry recipes and more.
READ MORE