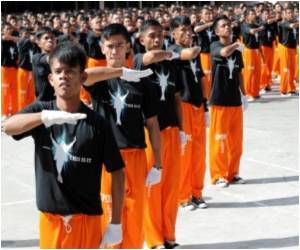 When Wang, 24, went to jail three years ago he had no idea he would end up in a bid to break a record for most inmates dancing together.

Wang is one of more than 2,000 inmates in Changhua Prison in central Taiwan who routinely take part in mass dancing sessions as part of a larger programme aimed at reforming prisoners through art and creativity.

The specially-abled artists presented colourful dance performance on wheelchairs in New Delhi, spreading a message of dignity and equality.
Advertisement

"I've made new friends since I joined the drills in July," said Wang, incarcerated for seven years for robbery, speaking to AFP on condition that only his family name be revealed. "I feel happier now than before."


The culmination of the twice-weekly dance practice was a mass Lunar New Year performance given by 2,011 prisoners in front of Justice Minister Tseng Yung-fu to the tunes of a famous song by local pop diva A-Mei.

In the 27 years Michael Anthony Green spent locked up in a cramped Texas prison cell for a crime he didn't commit, he often dreamed of moments like this one.
Advertisement
"I believe we've created a new record," said a proud Tai Shou-nan, who in his capacity of prison chief has the responsibility for altogether 2,724 inmates, all of them in their late teens or 20s.

This was a veiled reference to the recent Internet sensation created when 1,200 Filipino inmates were caught on video dancing to late superstar Michael Jackson's hit "This is It".

But for Tai it is more than a question of breaking records. The prison's programme, unique among the island's 48 detention centres, is based on a belief in the transforming powers of art.

"Through continued contact with art, whatever its form, inmates will be able to boost their confidence, while nurturing a feeling of honour," Tai said. "We think of Changhua Prison as a jail of art."

One of the prisoners-turned-performers is 25-year-old Pan, who has taken up the drum and practices with a 19-member group in three-hour sessions three days a week.

"I feel I'm confident now as my drum-beating technique keeps improving," said Pan, who also asked to be identified only by his family name.

The drum group has performed during a religious festival in the coastal township where the prison is located and at a celebration held in the justice ministry building in downtown Taipei.

"Performing before a lot of people and winning applause from them is a kind of feeling I've never had before," Pan said.

The jail has also organised groups that practice calligraphy and painting or engage in old trades such as noodle making, furniture carpentry, and even the production of traditional Chinese lanterns.

"In the beginning, we had to hire experts to teach the inmates how to make lanterns, but now they've become so skillful they can beat their teachers," a jail official said on condition of anonymity.

Academics support what the prison is trying to do, arguing that through the art training programmes, the inmates are able to fulfil themselves.

"In many cases, they were deserted by society before doing something not tolerated by the general people," said Chang Wei-an, a sociologist at National Tsinghua University in north Taiwan's Hsinchu city.

"Programmes like these may enable them to become part of society again and live normal lives once they finish their terms."

Pan, the drum beater, was a high school dropout when he killed a person about a decade ago. He was convicted of manslaughter and sentenced to 16 years in jail in 2004. He finished his high school programmes in jail and is now awaiting parole.

He said the drum practice teaches him to concentrate more on the tasks at hand, while helping him control his temper.

"My mind has become calm," he said with a smile.

Penalizing and imprisoning food safety activists in China has a chilling effect on others, says a UN envoy.
Advertisement
Advertisement
This site uses cookies to deliver our services.By using our site, you acknowledge that you have read and understand our Cookie Policy, Privacy Policy, and our Terms of Use  Ok, Got it. Close
×