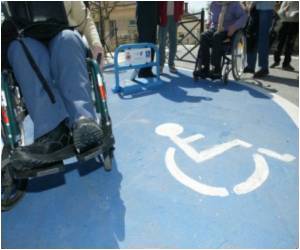 The specially-abled artists presented colourful dance performance on wheelchairs in New Delhi, spreading a message of dignity and equality.

Giving a message of dignity and equality, the specially-abled artists presented colourful dance performance on wheelchairs in New Delhi.

The world has heard of the illustrious mathematician and physicist, Albert Einstein, whose name is indelibly etched in the 'Theory of Relativity'.
Advertisement

Despite being confined to the wheel chairs, the physically disabled performers from the charitable organisation Ability Unlimited Foundation held audiences spellbound here on Saturday with their performances.


They have earlier staged shows in Italy, England and North America.

The group was choreographed by Syed Sallauddin Pasha, who was awarded with the National Award in 2007 for his outstanding performance in the field of empowerment of persons with disabilities.

According to Persons with Disabilities Act of 1995, India's disabled are entitled to a host of rights that would go a long way in enriching their lives.

International Day of Disabled Persons is observed on 3 rd December every year. The initiative underlining the theme of 'Decent work for persons with disabilities'.
Advertisement

Japan's Robot Suit Could Revolutionize Lives of The Disabled

Japan's Cyberdyne may share its name with the company responsible for nuclear destruction and the killer robots of the Terminator movie series, but the similarities end there.
Advertisement

How to Zumba Dance Your Way to Good Health

Zumba dance workout is a combination of Latin music and International music. Learn to Zumba, to make your ...
This site uses cookies to deliver our services.By using our site, you acknowledge that you have read and understand our Cookie Policy, Privacy Policy, and our Terms of Use  Ok, Got it. Close
×