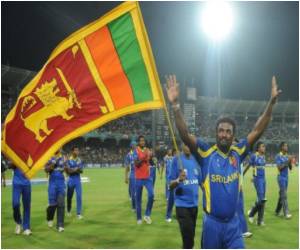 They also called in food inspectors to check the spread of a suspected gastro virus at the tournament following various players going down with stomach bugs, according to officials.

An incurable form of leukemia was beaten off by former England cricketer John Edrich thanks to regular injections of mistletoe.
Advertisement

Several players from New Zealand, Ireland, South Africa and Australia have reportedly been treated for stomach bugs since their arrival in Sri Lanka, with Kiwi Tim Southee even requiring hospital treatment for dehydration.


An International Cricket Council (ICC) spokesperson said the brand of bottled water used by players and officials so far in the tournament had been replaced.

Cricket's charity organization has decided to teach around 10,000 Neets the basic skills of cricket to gain sports qualifications, which would keep them out of trouble.
Advertisement
"Although there is no evidence to suggest that water was the cause of any illness, the product supplied for use in the tournament has been replaced," Sports24 quoted an ICC spokesperson, as saying.

A well-placed source in Sri Lanka connected with the tournament said public health inspectors had checked the food given to the players and found nothing troublesome.

"If an entire team, or at least a majority, go down, we can understand that there is something wrong with the food and beverages department. Just a few players have been affected," the source said.

No official complaints had been lodged by any of the teams, the source added.

Among players who went down with gastro trouble over the past two weeks included New Zealand's Daniel Vettori, Mitchell Starc and Brad Hogg of Australia, and Paul Stirling and George Dockrell of Ireland.

Pakistan is fervently lobbying with the UAE government for early release of cricketer Mohammed Asif, now in detention over possession of some illegal drug.
Advertisement
<< Taking Sleeping Pills Without Doc's Advice Put Insomniacs H...
New App to Show Facebook Activity in Form of Pie Charts and... >>