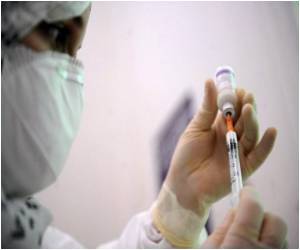 People who recovered from the 2009 H1N1 "swine flu" pandemic developed unusual antibodies that protect against a variety of different flu strains, US researchers said Monday.

Experts were surprised to find that patients' immune response to a new flu could boost the search for a universal vaccine against a series of strains that have existed for decades, said the study in the Journal of Experimental Medicine.

Researchers in the United States examined nine patients who fell ill last year, and found antibodies that when tested in mice could protect against a lethal dose of at least three other strains of flu, including bird flu.


"The result is something like the Holy Grail for flu-vaccine research," said study author Patrick Wilson, assistant professor of medicine at the University of Chicago.

The real challenge lies in convincing people about the goodness of the vaccine as a step towards disease control and public health preparedness.
Advertisement
"It demonstrates how to make a single vaccine that could potentially provide immunity to all influenza," he said.

"The surprise was that such a very different influenza strain, as opposed to the most common strains, could lead us to something so widely applicable."

Researchers examined nine patients, most of whom were in their 20s and 30s. Some had a mild form of the flu that cleared after a few days; others had a more severe form that required hospitalization for up to two months.

They took blood samples from the patients about 10 days after they showed symptoms, found white blood cells that produced antibodies against the flu virus, then isolated those antibodies.

"Five antibodies isolated by the team could bind all the seasonal H1N1 flu strains from the last decade, the devastating 'Spanish flu' strain from 1918 and also a pathogenic H5N1 avian flu strain," said the study.

Researchers tested three of the antibodies they isolated and found they could protect mice against the 2209 H1N1 strain as well as two other prevalent forms of flu.

"Two antibodies could protect mice against an otherwise lethal dose of any of the three strains, even when the antibody was given 60 hours after infection. However, one antibody only protected against the 2009 H1N1 strain," said the study.

That antibody came from the patient who recovered from the most severe infection of H1N1, and researchers said it was likely that the patient "had a complete lack of preexisting immunity to H1N1 viruses."

In the other patients who experienced milder infections, their response to H1N1 appeared to form from a foundation based on immune response to prior flu shots or infections.

The virus infected an estimated 60 million people and hospitalized more than 250,000 in the United States, researchers said.

First detected in the United States and Mexico in 2009, swine flu was unusual because it was particularly dangerous for young people and pregnant women, unlike most other strains of flu which tend to be more lethal in older populations.

Influenza (or rather, the flu) is a cold weather infectious condition that affects the young and old alike. Though most reported cases are mild, the flu can sometimes cause severe and life-threatening complications in both children and adults, thanks to wrong medications and improper vaccinations. Learn more about the disease from our Flu Quiz and guard yourself and your family from a poss
Advertisement
Advertisement