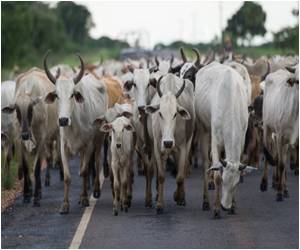 Authorities have confirmed that Brazil is probing a suspected case of "atypical" mad cow disease detected in the country. It is a worrying scenario as Brazil is one of the world's biggest beef exporters.

The Agriculture Ministry said in a statement to AFP that the alleged case of bovine spongiform encephalopathy (BSE) was found during a routine inspection of a slaughterhouse in the state of Mato Grosso.

It was traced to a single, 12-year-old grazing cow slaughtered on March 19 due to old age. It did not have any symptoms of the disease.


"These are the main characteristics of an atypical case of BSE that occurs sporadically and spontaneously, unrelated to eating contaminated food," the ministry said.
Advertisement
Products made from the cow did not enter the human or animal food chain, it added.

All animals that had contact with the cow were identified and isolated.

Word of a possible mad cow case has sparked concern among Brazilian exporters.

"The news comes at a bad time," Jose Augusto, the president of Brazil's foreign trade association, was quoted as saying by the O Globo daily.

"Meat prices are rising on the international market, which would help offset the low prices of other raw materials," he added. "And that doesn't take into account that international partners could be driven to suspend their Brazilian imports."

In 2012 and early 2013, almost 10 countries suspended their imports of Brazilian beef after a case of atypical mad cow disease detected in an animal that died in 2010 in the southern state of Parana.

A subsequent probe showed that the animal did not die of BSE.

The Paris-based World Organization for Animal Health said at the time that it was "maintaining Brazil's status as a country with an insignificant risk of BSE."

Brazil's agricultural exports beat a new record in 2013, with beef products among those that saw the greatest increase compared to 2012, according to the Center for Advanced Studies on Applied Economics.