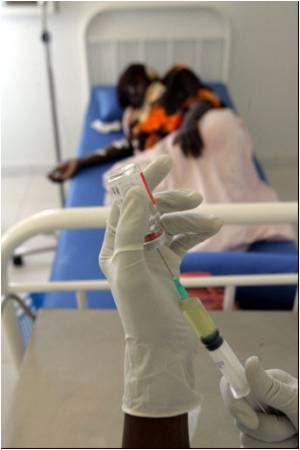 Ovarian cancer is proving to be less threatening to life as survival rates have nearly doubled in the last thirty years, claims a report released by Cancer Research UK.

In the 1970s, chances of surviving five years after diagnosis of early stage ovarian cancer was only 21 per cent, but today there is a 41 per cent chance of survival. Every year more than 1,000 women in England are surviving for at least five years.  Better treatment strategies have made this possible.  Nevertheless, this improvement is seen only in women in the early stages of cancer. Researchers feel that more needs to be done to see the same improvement in women who are at the advanced stage of the disease.

Women with stage III ovarian cancer where the disease has spread to nearby tissue, have just 20 per cent of survival; and those who are at stage IV that has spread to distant tissues, survival chances drop to below 6 per cent. Dr James Brenton, who is based at Cancer Research UK's Cambridge Research Institute and who also works as an ovarian cancer clinician at Cambridge's Addenbrooke's hospital says that although there has been significant improvement in treating the disease in its early stages, the real challenge is "translating these improvements in survival to women whose ovarian cancer has already spread."


The danger in ovarian cancer is in the fact that it is a silent killer whose symptoms are difficult to identify in the early stages of the disease. Cancer Research UK is financing a preliminary trial involving over 200,000 women to test the effectiveness of screening for ovarian cancer with ultrasound and blood tests. It finishes in 2015, and if successful, it will make it possible it have a nationwide screening programme that will detect ovarian cancer earlier and thereby improve survival rates.

Cancer, is the second most leading cause of death worldwide. Cancer is not just one disease but many diseases. There are more than 100 different types of cancer. Take this quiz on and test how much you know about cancer.
Advertisement
The chemotherapy drug carboplatin introduced in the 1980s was successful in treating women at first diagnosis and also proved effective for treating recurrences. Today, new drugs such as PARP inhibitors that could help women with ovarian cancer who also have faulty BRCA genes have proved to be effective.

Researchers feel there is still a long way to go before a successful treatment strategy for ovarian cancer is in place.

A list of Must Know Top 12 Cancer Facts of the World.
Advertisement
<< A 'coffee' a Day Keeps Stroke, Diabetes and Liver Cancer Aw...
Cancer Prevalence in HIV Patients >>