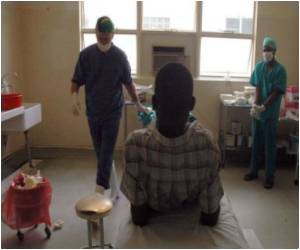 
"We have been trying to emphasize on male sterilisation and males are coming forward for sterilisation in last few years but more needs to be done," said Health Secretary P.K. Pradhan.

Oral contraceptive or birth control pills contain hormones that prevent pregnancy. It is one of the most reliable methods of contraception.
Advertisement
The survey found stark differences among and within states on parameters like total fertility rate, current usage of family planning, mean age at marriage, delivery care and immunisation.

More than half of currently married woman aged 15-49 years are not using any method of family planning in Uttar Pradesh, Jharkhand and Bihar.

"As many as 98 districts have reported less than 50 percent current usage of any method of family planning. Only 12 districts of 284 surveyed districts feature in 70 percent and above category," said the survey.

The survey found that in 164 districts, a woman bears more than three children on an average with the highest (six) born to a woman in Shrawasti (Uttar Pradesh) and lowest (two) in Pithoragarh in Uttarakhand.

The survey found that marriages among females taking place below legal age (18 years) are rampant in rural areas as compared to urban areas.

"In rural areas every fourth marriage in Rajasthan, every fifth in Bihar and Jharkhand takes place below the legal age. It has been noted that higher proportion of males are getting married below legal age (21 years) as compared to females in these states," it said.

A woman has become the first in the UK to be sterilised in a 15-minute procedure dubbed 'female vasectomy'.
Advertisement
<< Cannabis Pharma Factory Discovered
New Method for Identifying Lung Nodules Identified >>

Test Your Knowledge on Lung Transplantation
View all
News Archive
News Resource
Advertisement
News Category
Is There a Link Between Heart Failure and Y Chromosome in Men? Male Contraceptive Pills Show Promise Common Prostate Cancer Drugs Were Less Safe: New Study Taller Than an Average Man: May Have High Risk of Testicular Cancer Do Men Infected With COVID-19 Have Semen Problems Like Infertility?
More News
Sign up for Wellness Consult a Doctor Sign up for Selfcare