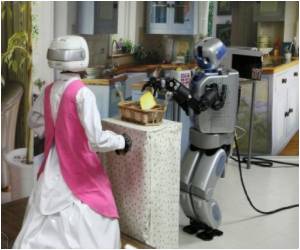 A super-smart robot that can learn from the Internet, crack jokes and sing karaoke has been invested by a British toy maker.

Technology enthusiast Tony Ellis, 54, designed the AIMEC domestic droid, who sees it as more of a companion than a toy.

Children Taught to Use Wheelchair by Robot

In yet another technological breakthrough in health care, a robotic wheelchair is being developed that will help children learn to 'drive'.
Advertisement


"It is a robot that knows who you are. It will recognise your face and your voice," the Sun quoted Ellis as saying.

"It evolves the longer you have it by downloading information off the Internet and learning your likes and dislikes. It picks up its own personality."

Jiffy Snacks from a Robot

American scientists have created a new robot that can deliver snacks.
Advertisement
Despite investing "thousands" in the 4ft tall machine, Tony hopes it will eventually retail for just 200 pounds.

"Robots are at the same stage personal computers were 30 years ago.

"Back then people laughed when experts said that everyone would have a PC in their house but now everyone does.

"I think AIMEC points the way to what the future holds for robots. Everybody will soon be using them as help round the house but also companionship.

"It can interact with you on a very sophisticated level. It reads my email to me. If I fancy some music I can ask it to pick something and it knows what I like.

"It can even do manual work - and is very good at watering the plants," Ellis.

By scanning the internet, AIMEC can give its owner up-to-the-minute information, or even teach them a foreign language.

Tony said: "I knew I had made something really special when it told me about the newest Terminator film months before I heard about it anywhere else. It knew I loved the first ones.

AIMEC is also programmed for entertainment - and can even do IMPRESSIONS of famous sci-fi robots like C3P0, R2D2 and Hal 9000 from Space Odyssey.

Tony has been inventing robots since the late 1970s and is recognised as one of the world's leading android experts.

A robot, developed by Japanese researchers, that imitates speech and mannerisms sent through the video-phone makes virtual visits by distant callers possible.
Advertisement
Advertisement
This site uses cookies to deliver our services.By using our site, you acknowledge that you have read and understand our Cookie Policy, Privacy Policy, and our Terms of Use  Ok, Got it. Close
×