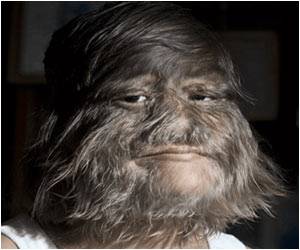 Supatra Sasuphan has been officially recognized as the hairiest girl in the world.

The 11-year-old suffers from a rare genetic disorder called Ambras Syndrome that triggers the growth of thick hair all over her face. Supatra has been teased all her life with people calling her 'monkey face' and 'wolf girl'.

Supatra, from Pranakom, Thailand often cried to herself after facing people who called her these names. However the girl now says that official recognition has given her confidence to battle these issues.


"I'm very happy to be in the Guinness World Records. All I did was answer a few questions about myself and then they gave it to me," she enthused. The award has boosted her confidence so much that she has now taken up singing and dancing. She hopes that one day her disorder will be cured and she can lead a normal life.

Depression is one of the most common mental disorders affecting approximately 340 million people in the world. No one is immune from depression - it occurs in people of all social classes, all countries and all cultural settings.
Advertisement
<< Hip Implant Manufacturer Sued
Healthcare Becomes Dearer >>