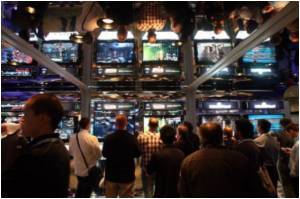 Hollywood films rated PG-13 today seem to be more violent when compared to a generation ago PG-13 movies, revealed in a study.

Ron Leone, an associate professor at Stonehill College in Easton, and his colleagues analyzed the content of a sample of PG-13 movies from three different years: 1988, 1997 and 2006.

Researchers have found that PG-13 rated films are not safe for kids for they depict violence, which has a negative effect on them.
Advertisement

They documented each incident of violence, sexual content, nudity, use of adult language and presentations of substance abuse - the same criteria members of the MPAA's Classification and Ratings Administration (CARA) consider when assigning a rating to a film.


"Our quantitative content analysis of 45 films indicated a significant increase in violent content in these films, despite the ratings remaining the same," Leone said.

Hollywood Films Blamed for Inspiring pregnancy Pact Among the Teens

Hollywood films such as Juno and Knocked Up have been blamed for inspiring the pregnancy pact - a deal made by seventeen US schoolgirls to get pregnant together.
Advertisement
"We searched for evidence of 'creep' in all categories, but our results pointed to one conclusion.

"In the PG-13 rating category, the only area of adult content on the rise was violence," he said.

According to Leone, none of the other four areas showed any statistically significant evidence of ratings creep.

"This is important because it is at this level-the PG-13/R threshold-that it matters most, as this distinction serves as a line of demarcation between restricted and unrestricted access by children to movies.

"Our results suggest a leniency toward violent content by the MPAA ratings board that parallels America's parents' greater comfort with children being exposed to violence than other types of adult content in the unrestricted PG-13 rating category," Leone said.

The finding was published this week in the Journal of Children and Media.

Indian Medical Journals Blood Pressure Calculator Color Blindness Calculator A-Z Drug Brands in India Diaphragmatic Hernia Accident and Trauma Care Find a Hospital Sanatogen Vent Forte (Theophylline) The Essence of Yoga
This site uses cookies to deliver our services. By using our site, you acknowledge that you have read and understand our Cookie Policy, Privacy Policy, and our Terms of Use