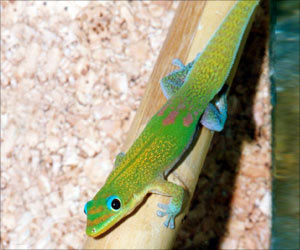 Geckos, found in places with warm climates, have fascinated people for hundreds of years. Scientists have been especially intrigued by these lizards, and have studied a variety of features such as the adhesive toe pads on the underside of gecko feet with which geckos attach to surfaces with remarkable strength.

One unanswered question that has captivated researchers is: Is the strength of this adhesion determined by the gecko or is it somehow intrinsic to the adhesive system? In other words, is this adhesion a result of the entire animal initiating it? Or is the adhesion fundamentally "passive," its strength resulting from the way just the toe pads work?

Geckos, which are found in warm regions of the world, are extremely capable of climbing up steep, smooth surfaces.
Advertisement

Biologists at the University of California, Riverside have now conducted experiments in the lab on live and dead geckos to determine the answer. Their experiments show, for the first time, that dead geckos can adhere with the exact same strength as living geckos.


Study results, appearing online Dec. 3 in Biology Letters, could have applications in the field of robotics.

"With regards to geckos, being sticky doesn't require effort," said Timothy E. Higham, an assistant professor of biology, who conducted the research alongside William J. Stewart, a postdoctoral researcher in his lab. "We found that dead geckos maintain the ability to adhere with the same force as living animals, eliminating the idea that strong adhesion requires active control. Death affects neither the motion nor the posture of clinging gecko feet. We found no difference in the adhesive force or the motion of clinging digits between our before- and after-death experiments."

A model that explains how geckos can run up and down walls, cling to ceilings, and seemingly defy gravity with such effortless grace has been developed.
Advertisement
Higham explained that there have been suggestions in the literature for many years that gecko adhesion at the organismal, or whole-animal, level (where the intact animal initiates adhesion) requires an active component such as muscle activity to push the foot and toes onto the surface in order to enhance adhesion. This has, however, never been tested.

Higham and Stewart took on the challenge and tested the hypothesis. The researchers used a novel device involving a controlled pulling system. This device applies repeatable and steady-increasing pulling forces to the gecko foot in shear. Specifically, the device measures clings by pulling a gecko foot in a highly controlled manner along a vertical acrylic sheet while simultaneously recording shear adhesion with video cameras.

Warning Issued Over Using Geckos to Treat AIDS and Impotence

The health department in Philippines has warned the general public against following the traditional medicine practice of using geckos to treat AIDS and impotence.
Advertisement
Advertisement
This site uses cookies to deliver our services.By using our site, you acknowledge that you have read and understand our Cookie Policy, Privacy Policy, and our Terms of Use  Ok, Got it. Close
×