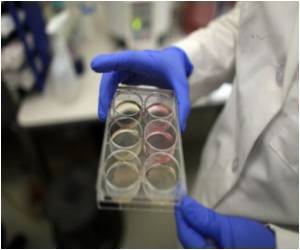 Stem cells are cells that are able to develop into different specialized cell types with specific functions in the body. In adult humans these cells play an important role in tissue regeneration. The potential to act as repair cells can be exploited for disease control of e.g. Parkinson's or diabetes, which are diseases caused by the death of specialized cells. By manipulating the stem cells, they can be directed to develop into various specialized cell types. This however, requires knowledge of the processes that regulate their development.

Now Danish researchers from University of Southern Denmark report a new discovery that provides valuable insight into basic mechanisms of stem cell differentiation. The discovery could lead to new ways of making stem cells develop into exactly the type of cells that a physician may need for treating a disease.


"We have discovered that proteins called transcription factors work together in a new and complex way to reprogram the DNA strand when a stem cell develops into a specific cell type. Until now we thought that only a few transcription factors were responsible for this reprogramming, but that is not the case", explain postdoc Rasmus Siersbaek, Professor Susanne Mandrup and ph.d. Atefeh Rabiee from Department of Biochemistry and Molecular Biology at the University of Southern Denmark.
Advertisement
"An incredibly complex and previously unknown interplay between transcription factors takes place at specific locations in the cell's DNA, which we call 'hotspots'. This interplay at 'hotspots' appears to be of great importance for the development of stem cells. In the future it will therefore be very important to explore these 'hotspots' and the interplay between transcription factors in these regions in order to better understand the mechanisms that control the development of stem cells", explains Rasmus Siersbaek.

"When we understand these mechanisms, we have much better tools to make a stem cell develop in the direction we wish", he says.

Siersbaek, Mandrup and their colleagues made the discovery while studying how stem cells develop into fat cells. The Mandrup research group is interested in this differentiation process, because fundamental understanding of this will allow researchers to manipulate fat cell formation.

"We know that there are two types of fat cells; brown and white. The white fat cells store fat, while brown fat cells actually increase combustion of fat. Brown fat cells are found in especially infants, but adults also have varying amounts of these cells." "If we manage to find ways to make stem cells develop into brown rather than white fat cells, it may be possible to reduce the development of obesity. Our findings open new possibilities to do this by focusing on the specific sites on the DNA where proteins work together", the researchers explain.

Details of the study The researchers worked with a well-known cell line that can be induced to develop into fat cells in about a week in the laboratory using a specific cocktail of hormones. It has been known for many years that this process is regulated by proteins in the cells called transcription factors that control which genes are turned on and off during development of the fat cell. So far it has been unclear how all these proteins work together to create a fat cell. In this paper, the researchers report that transcription factors bind together to special places in the cell's genome called 'hotspots' . Here transcription factors 'talk' to each other and cooperate in controlling which genes are switched on and off. 'Hotspots' therefore act as key hubs in the genome where different signals are integrated on a small piece of DNA. The researchers further showed that there are often several of these 'hotspots' close to each other and that they work together to form large so-called 'super-enhancers'. These 'super-enhancers' seem to be extra important in order to activate the right genes during fat cell development. This study thus shows an extremely high degree of cooperativity between transcription factors at the level of DNA, which seems to be very important for directing the development of stem cells.

Stem Cells may Help Develop Eco-Friendly Meat
There may be a future where faulty organs could be regrown from stem cells, and they would be an ......

Cancer Stem Cells Identified for the First Time in Human Patient
For the first time, gene mutations that drive cancer have been tracked in a patient, which has ......