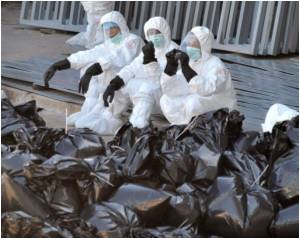 A genetic analysis of the avian flu virus responsible for at least nine human deaths in China portrays a virus evolving to adapt to human cells. This is raising concern about its potential to spark a new global flu pandemic.

The collaborative study, conducted by a group led by Masato Tashiro of the Influenza Virus Research Center, National Institute of Infectious Diseases, and Yoshihiro Kawaoka of the University of Wisconsin-Madison and the University of Tokyo, appears in the current edition (April 11, 2013) of the journal Eurosurveillance. The group examined the genetic sequences of H7N9 isolates from four of the pathogen's human victims as well as samples derived from birds and the environs of a Shanghai market.

"The human isolates, but not the avian and environmental ones, have a protein mutation that allows for efficient growth in human cells and that also allows them to grow at a temperature that corresponds to the upper respiratory tract of humans, which is lower than you find in birds," says Kawaoka, a leading expert on avian influenza.


The findings, drawn from genetic sequences deposited by Chinese researchers into an international database, provide some of the first molecular clues about a worrisome new strain of bird flu, the first human cases of which were reported on March 31 by the Chinese Center for Disease Control and Prevention. So far, the new virus has sickened at least 33 people, killing nine. Although it is too early to predict its potential to cause a pandemic, signs that the virus is adapting to mammalian and, in particular, human hosts are unmistakable, says Kawaoka.
Advertisement
Access to the genetic information in the viruses, he adds, is necessary for understanding how the virus is evolving and for developing a candidate vaccine to prevent infection.

Influenza virus depends on its ability to attach to and commandeer the living cells of its host to replicate and spread efficiently. Avian influenza rarely infects humans, but can sometimes adapt to people, posing a significant risk to human health.

"These viruses possess several characteristic features of mammalian influenza viruses, which likely contribute to their ability to infect humans and raise concerns regarding their pandemic potential," Kawaoka and his colleagues conclude in the Eurosurveillance report.

Kawaoka, a faculty member in the UW-Madison School of Veterinary Medicine who also holds a faculty appointment at the University of Tokyo, explains that the majority of the viruses in the study  from both humans and birds  display mutations in the surface protein hemagglutinin, which the pathogen uses to bind to host cells. Those mutations, according to Kawaoka, allowed them to easily infect human cells.

In addition, the isolates from patients contained another mutation that allows the virus to efficiently replicate inside human cells. The same mutation, Kawaoka notes, lets the avian virus thrive in the cooler temperatures of the human upper respiratory system. It is in the cells of the nose and throat that flu typically gains a hold in a mammalian or human host.

Kawaoka and his colleagues also assessed the response of the new strain to drugs used to treat influenza, discovering that one class of commonly used antiviral drugs, ion channel inhibitors which effectively bottle up the virus in the cell, would not be effective; the new strain could be treated with another clinically relevant antiviral drug, oseltamivir.