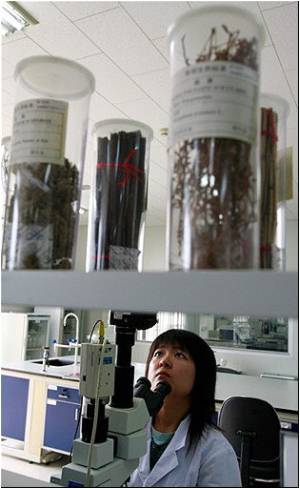 It is well-known that bacteria like salmonellae possess an infection apparatus which is a nearly unbeatable weapon.

They usually infect their host cells by hollow-needle-shaped structures, which they create in large numbers during an attack.

Now, a group of Vienna-based scientists, headed by Thomas Marlovits, has developed a high-resolution cryo-electron microscopy to clarify the structure of this infection apparatus on the near-atomic scale.


They said that the exact knowledge of the needles' building plan may help to develop compounds that interfere with its function, and thus combat not only salmonellae but also other pathogens that employ this system, such as pathogens that cause cholera, plague or typhoid.

Leucopenia / Leukopenia is a decrease in the number of total white blood cells found in blood. The normal total white cell count is 5000-10000 per cubic millimeter.
Advertisement
'Austria's coolest microscope' makes it possible to shock-freeze biological samples at minus 196 degrees centigrade and view them in almost unchanged condition.

However, when 'zooming in' on their object, scientists are confronted with a treacherous problem - the high-energy electron beam falls at such high concentrations on the sample that the latter is destroyed after the very first image.

Similar images were grouped and computed jointly. By doing so they were able to generate a single sharp image from numerous blurred ones. This enormous computing power was created by a cluster of about 500 interconnected computers.

The microscope works in semi-automated fashion at night to obtain the large number of images. This is very advantageous because human beings merely interfere with the job. They breathe, speak, move, and thus unsettle the sensitive microscope. Even a moving elevator may irritate the electron beam.

They were able to 'adjust' existing data (obtained from crystallography) to the needle structure and thus complement the three-dimensional image in a perfect manner. The use of this hybrid method enabled the scientists to elucidate the complete construction plan of the infection apparatus.

Marlovits regards this technology as an innovation boost.

"Using the methods we developed for our work, we were able to establish "imaging" standards at a very high level. We can explore its absolute limits with the aid of the fantastic infrastructure we have here at Campus Vienna Biocenter," he said.

The study will appear in the forthcoming issue of the journal Science.

A novel biosensor that can instantly detect Salmonella typhi, the bacteria that causes typhoid fever, has been developed by scientists from Rovira i Virgili University (URV) in Tarragona.
Advertisement
Advertisement