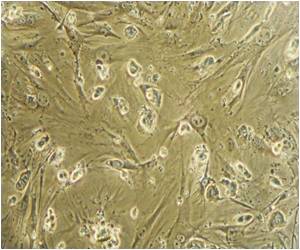 An adult stem cell from blood to understand and potentially improve cardiovascular health has been isolated by a team of scientists.

Instead, scientists have found that multiple types of cells with primitive characteristics circulating in the blood appear to provide the same benefits expected from a stem cell, including the endothelial progenitor cell that is the subject of hot pursuit.

"There are people who still dream that the prototypical progenitors for several components of the cardiovascular tree will be found and isolated. I decided to focus the analysis on the whole nonpurified cell population - the blood as it is," said Nicanor Moldovan, senior author of the study and a research associate professor of cardiovascular medicine at The Ohio State University.


"Our method determines the contributions of all blood cells that serve the same function that an endothelial progenitor cell is supposed to. We can detect the presence of those cells and their signatures in a clinical sample without the need to isolate them."

The risk factors that work behind the scene before a heart attack are familiar to many. But do you realize the extent to which your lifestyle choices are putting your life at risk? Can you identify a heart attack when it occurs? Take our quiz and find out.
Advertisement
The study is published in the journal PLOS ONE.

Stem cells, including the still poorly understood endothelial progenitor cells, are sought-after because they have the potential to transform into many kinds of cells, suggesting that they could be used to replace damaged or missing cells as a treatment for multiple diseases.

By looking at gene activity patterns in blood, Moldovan and colleagues concluded that many cell types circulating throughout the body may protect and repair blood vessels - a key to keeping the heart healthy.

The scientists also found that several types of blood cells retain so-called "primitive" properties. In this context, primitive is positive because these cells are the first line of defense against an injury and provide a continuous supply of repair tissue either directly or by telling local cells what to do.

By comparing gene activation patterns with the study blood donors' health status, the research showed which genes in blood are associated with such problems as high blood pressure and inflexible blood vessels.

In physicians' hands, this analysis could be used to diagnose certain diseases, monitor the effects of some treatments and determine a cardiovascular patient's prognosis. Further analysis also could help explain how primitive properties in cells, which decrease as humans age, reduce the body's protective and repairing resources.

At the start of this work, the research group proposed a method intended to physically isolate an endothelial progenitor cell candidate. When the evidence didn't support their hypothesis, they adjusted to a systems biology approach and decided to "keep the whole soup" of blood for analysis instead, said Moldovan, an investigator in the Davis Heart and Lung Research Institute and a member of the Center for Regenerative Medicine and Cell-Based Therapies at Ohio State.

The researchers analyzed gene activity, or expression, in the blood cells at an early point in the process - at the messenger RNA (mRNA) level, before proteins are made. Based on previous studies that have helped identify markers that indicate whether cells are primitive or mature, they narrowed the search to detect mRNA for 45 genes in the blood cells.

Using the bioinformatics principle of "guilt-by-association" to analyze the massive amounts of data, "we let those genes that participate in a common function or that share a common structure to show themselves up objectively in the data," he said.

The sorting produced clusters of genes that were further analyzed to identify their purpose. The genes aggregated into two modules, and the researchers zeroed in on a module in which a total of 15 primitive and cardiovascular genes showed a clear connection.

An initial finding countered conventional wisdom about embryonic-level primitive cells: It's thought by some scientists that these types of cells cannot exist in bone marrow, and thus in the adult blood. But this analysis detected embryonic stemness genes "constantly and in all samples we looked at," Moldovan said.

The blood samples came from two groups of human research participants: 26 healthy volunteers and 20 patients with a diagnosis of high blood pressure. Blood from healthy people helped define the cardiovascular-relevant module - a gene profile of cardiac health that was then compared to characteristics of gene behavior in patients with hypertension.

To determine the physiological significance of the clustered primitive and cardiovascular genes, researchers compared their expression patterns to four patient measures: age, a measure of vascular stiffness (healthy vessels are flexible, not stiff), blood pressure and body mass index (BMI). The correlation pattern suggested that higher expression of these genes was linked to younger age, more flexible vessels and lower blood pressure.

"This means the genes in this module are protective against high blood pressure and vascular stiffness, which are related," Moldovan said. "And they reflect a property of blood that is being lost in time, as you would expect from progenitor cells. They have a protective and presumably repairing function, which diminishes with age."

In women, a higher BMI was associated with higher expression of these genes, which Moldovan said might help explain the overweight paradox - the apparently protective role of a few extra pounds in a variety of medical conditions.

Scientists also compared this gene module to images representing stiffness of human aortas and found similar connections - low expression of these genes was associated with more stiffness in the body's largest artery.

"This is an example of how we intend to apply this in a clinical setting," Moldovan said.

He said that with this comprehensive knowledge about expression patterns of 45 genes in the blood, scientists can now search for the molecules produced by those genes to identify which kinds of blood cells resemble adult stem cells - namely, those cells whose genes show that they retain primitive characteristics. He added that, based on other preliminary data, he and colleagues are confident that this gene module can be expanded using the same bioinformatics approach to add new candidate members.

"Our goal is to assess the status of the system of progenitors in the bloodstream in its natural complexity, to understand and anticipate the prognosis of what's going to happen with the patient," Moldovan said. "It requires letting go of the old paradigm of 'cell type' and embracing the more abstract notion of a cluster of genes - a 'metagene'- that associates with blood and changes as the condition of a patient changes."

The heart pumps blood constantly providing the power to sustain life.
Advertisement
<< Memory Loss in Mice With Alzheimer's Reversed
Health Cost Burdens can be Eased With Clinics That are Not ... >>