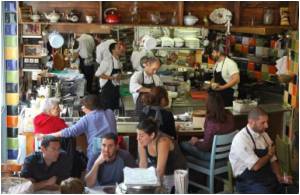 An analysis of the fresh orange juice squeezed by machines in catering establishments in Spain revealed that 43% of samples exceeded the acceptable enterobacteriaceae levels laid down by legislation. The researchers recommend that oranges are handled correctly, that juicers are washed properly and that the orange juice is served immediately rather than being stored in metal jugs.

Around 40% of the fresh orange juice consumed in Spain is squeezed in bars and restaurants. According to a study conducted by researchers at the University of Valencia (UV) though, poor handling of the oranges and insufficient cleaning of the juicer equipment stimulates bacterial contamination.

The team collected 190 batches of squeezed orange juice from different catering locations and analysed their microbiological content on the same day. The results reveal that 43% of the samples exceeded the enterobacteriaceae levels deemed acceptable by food regulations in Spain and Europe. Furthermore, 12% of samples exceeded mesophilic aerobic microorganism levels.


According to the data published in the Food Control Journal, the presence of Staphylococcus aureus and the Salmonella species was found in 1% and 0.5% of samples respectively.

Consuming foods that have been contaminated with pathogens such as E.coli, Salmonella or Campylobacter, can cause food poisoning.
Advertisement
Isabel Sospedra, one of the authors of the study warns that "generally a percentage of oranges juice is consumed immediately after squeezing but, as in many cases, it is kept unprotected in stainless steel jugs."

In fact, the scientists have found that some juices that were kept in metal jugs presented "unacceptable" levels of enterobacteriaceae in 81% of cases and in 13% of cases with regards to mesophilic aerobic bacteria. However, when the freshly squeezed juice is served in a glass, these percentages fall to 22% and 2% respectively.

As the researcher adds, "it must also be borne in mind that juicers and juicing machines have a large surface area and lots of holes and cavities. This promotes microbial contamination, which is picked up by the juice as it is being prepared."

The conclusion is clear. To ensure consumer health, the experts recommend that juicers are cleaned and disinfected properly. The same goes for the jugs in which the juice is stored although its consumption is better as and when it is squeezed.

Orange juice consumption is common in the catering industry due to its taste and nutritional value. This drink is known for its high content of vitamin C, carotenoids, phenolic compounds and other antioxidant substances.

In 2009, Spaniards drank 138 million litres of orange juice (according to data provided by the Spanish Ministry of the Environment and Rural and Marine Affairs), 40% of which was freshly squeezed and consumed in catering establishments.