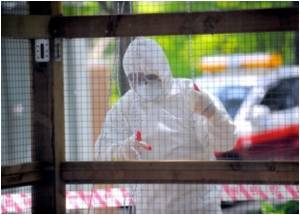 The agriculture ministry confirmed three new cases of the highly contagious virus at duck farms in the southwestern county of Yeongam, bringing the total number of cases to seven since December 31.

At least 396,000 chickens, ducks and other birds have been or will be culled, the agriculture ministry said on its website, as the fresh cases were reported after a week-long pause.


Health authorities have placed quarantine zones around nearby areas to carry out emergency disinfection on people and vehicles, especially those transporting animal feed.

Influenza (or rather, the flu) is a cold weather infectious condition that affects the young and old alike. Though most reported cases are mild, the flu can sometimes cause severe and life-threatening complications in both children and adults, thanks to wrong medications and improper vaccinations. Learn more about the disease from our Flu Quiz and guard yourself and your family from a poss
Advertisement
South Korea has been hit by avian influenza three times, with the last outbreak in April 2008.

Seoul on Sunday confirmed two new cases of the disease at a pig farm in the southeastern county of Bongwha and a cattle farm at the midwestern county of Cheongwon.

A total of 108 cases have been confirmed since the first outbreak on November 29, leading to the record slaughter of at least 948,000 cattle and pigs in 40 cities and counties.

Since November, South Korea has lost about seven percent of its cattle and pigs, with related losses estimated at more than one trillion won ($890 million).

More than 68,000 troops have been deployed to help culling efforts, with President Lee Myung-Bak on Thursday calling for "fundamental measures" to contain the disease, such as securing more vaccine.

In a desperate attempt to contain the spread of foot-and-mouth, the government has vaccinated 1.5 million cattle and pigs -- risking a longer export ban by overseas buyers.

It takes longer for a country that uses vaccinations to regain disease-free status from the World Organisation for Animal Health than when the disease is curbed solely by culling.

The agriculture ministry said Saturday that an additional 1.2 million pigs and cattle across the country will be vaccinated in the coming weeks, while it tries to secure vaccines for 6.5 million animals by the end of this month.

Fifty People Succumb to Foot and Mouth Disease in China

A highly contagious disease especially harmful to young children has killed 50 people in China this year, the health ministry said Friday as it warned the worst was yet to come.
Advertisement
<< Gender Discrimination Still Alive at Workplace
Severe OCD Sufferers May Benefit From Radiosurgery >>