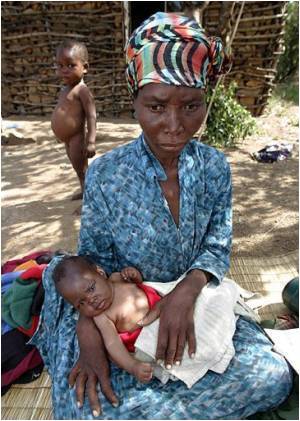 Health experts were concerned over the growing teen pregnancy rates in South Africa.

Sixteen-year-old Thandi is four months pregnant and among a jump in teenage pregnancies that are up 21 percent across South Africa in recent years, also raising fears of increased HIV infections among sexually active youth.

This Interactive provides step by step visual aid showing how to correctly use condoms which can prevent transmission of HIV, other sexually transmitted diseases and pregnancy
Advertisement

Most schools allow pregnant pupils to continue attending classes as long as they can, making young girls with baby bulges under their uniforms a common sight.


"I found out that I was pregnant two months ago. I haven't told anyone yet, only my boyfriend. He thinks I am joking," ninth grader Thandi said shyly.

Interesting information about the use of birth control pills, a debate about the birth control responsibility of men and women and development of hypothetical male contraceptive pill.
Advertisement
She said she had unprotected sex with her boyfriend of eight months many times before her pregnancy because she trusted him. She had never tried oral contraceptives and only used condoms when she could find one.

"I am going to try my best to hide my pregnancy so that I can continue learning. If I tell my parents, they are going to force me to withdraw from school," she said.

She wants to avoid embarrassing her family, which like many in South Africa believes that becoming a mother marks an end to childhood, and therefore to education.

In rural areas, the stigma is even more acute.

Mavalani high school in rural Giyani, in the northern province of Limpopo, has 24 pregnant girls with an average of two in every class.

Of those, 11 are in Grade 11, the second to last year of high school, according to the provincial education officials.

It is a source of shame to the community, where few people were willing to speak about the problem. Students last month stoned the school principal's car after he raised concerns about teen pregnancy in the national media.

The incidence of teen pregnancy is growing, according to the Human Science Research Council (HSRC), a government think tank.

That is still low compared to the rest of the continent, where UNICEF says the comparative figure is over 100 in countries like Nigeria, Uganda, Somalia and Swaziland. In Italy it is seven.

But South Africa has the world's largest HIV-positive population, with 5.7 million of its 48 million people infected with the virus.

That creates an added threat that has prompted health officials to rethink AIDS and pregnancy prevention programmes targeted at the youth.

In March the government launched a controversial schools-based voluntary HIV testing programme aimed at early detection of the virus among the youth.

According to the HSRC findings, black teenagers from poor urban areas are most likely to fall pregnant and contract HIV.

Poverty is rife in Africa's largest economy, with unemployment officially at 24 percent but widely estimated to be over 40 percent.

The concentration of poverty, unemployment and poor education can push girls to get into relationships with older men for financial reasons, adding to the pregnancy problem.

Although abortion is legal, obtaining one carries a harsh stigma.

Many teenaged girls give birth to prove womanhood and give meaning to life, especially after the end to the struggle against white-minority rule, Etkin said.

"Add to this a new generation whose identity is no longer centred around the struggle for freedom, but a struggle to forge identity in a world where old problems persist and new ones have sprung up," like AIDS, said Etkin.

"We also need to ensure that our programmes are culturally relevant and emphasise continuing education, particularly after child birth," she said.

Lovelife tackles the problem by staging plays in schools and soap operas on television to show teenagers how to handle their budding sexuality.

For Thandi, she's hopeful her baby will strengthen her relationship with her 20-year-old boyfriend, eventually leading to marriage.

Pregnancy is an experience of growth, change, enrichment and challenge. During the 40 weeks of pregnancy, the ...