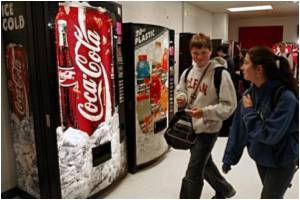 A new study says that consumption of soda at an early age in girls is indicative of an unhealthy diet through adolescence.

Soda drinkers drank far less milk than non-soda drinkers, and milk has all of the nutrients that differed between the groups except fibre.


"Adequate nutrient intake is important for optimal health and growth," the researchers reported.

For example, low calcium intake may lead to bone fractures, higher added sugar may cause dental problems and the development of several chronic diseases, such as type 2 diabetes.

Nutritional Assessment Calculator helps to find out if you child is undernourished or malnourished.
Advertisement
The Institute of Medicine, part of the National Academy of Sciences, recommends that girls between age 14 and 18 receive at least 65 milligrams of vitamin C daily. In this study, soda drinkers fell short at just 55 milligrams daily, while non-soda drinkers exceeded the recommendation at 70.5 milligrams daily.

The study also found that the consumption of soda intake in soda drinkers increased even more after 15 compared to their counterparts. Laura Fiorito, postdoctoral fellow in Penn State's Center for Child Obesity Research, suggested that "parents model consumption patterns for their children," and that the parents' unhealthy eating habits not only contributed to an increased BMI, but influenced children.

The American Academy of Pediatrics issued a formal statement in 2001 that recommended limits on children's fruit juice intake, but none on soda. his study provides a clear link showing that soda can prevent people from maintaining a healthy diet.

It was published in a recent issue of the Journal of the American Dietetic Association.

Obesity is resistant to instant remedies and its management is a long-term endeavor. Here are a few tips to control obesity in children.
Advertisement
<< 'Clot Vacuum Cleaner' May Help to Suck Out Strokes
India Aims to Safeguard Yoga from Fake Patents >>

Blood Pressure Calculator Vent Forte (Theophylline) Drug Side Effects Calculator Nutam (400mg) (Piracetam) Loram (2 mg) (Lorazepam) Find a Doctor Blood Donation - Recipients How to Reduce School Bag Weight - Simple Tips Accident and Trauma Care Sanatogen
This site uses cookies to deliver our services. By using our site, you acknowledge that you have read and understand our Cookie Policy, Privacy Policy, and our Terms of Use