Snake Bite Victim Succumbs After Being Wrongly Treated for a Stroke 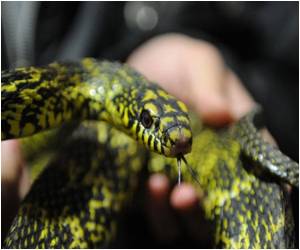 A NSW woman succumbed to a snake bite due to misdiagnosis after she was treated for a stroke instead of a snake bite.

This 59 year old woman was found by her husband in the garden where she had collapsed after the bite.

She was treated by paramedics for half an hour and later rushed to John Hunter Hospital, where her symptoms were thought to be that of a stroke.


When she did not respond to treatment, doctors discovered two puncture marks on her ankle. By then, it was too late and the woman could not survive.

Toxicology researcher Geoff Isbister said "The venom stops their blood clotting and people suffer haemorrhaging, often in the head, or anywhere. Last season we had six deaths across Australia, which is the worst recorded season."

Snake Bites Mans Penis in the Toilet
A 35-year old man in northern Israel had to be rushed to a hospital after a snake bit him on his ......

Nine Year Old Girl Getting Better After a Snake Bite
Tyler Butcher, all of nine years, was bitten by an 18-inch-long adder when she was enjoying a ......

Four Vials of Antivenom Quite Unnecessary to Treat Snake Bites
Recent insight has pointed out that some doctors are using four times the amount of antivenom ......

Indian Snake Antivenom
Snake antivenom is a medicine used for the treatment of patients suffering from snake envenomation....