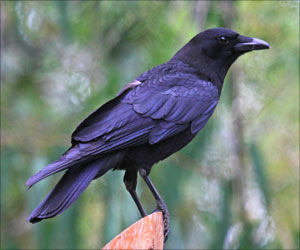 A recent research has revealed the smartness of crows. The sample cup in the middle was covered with a small card on which was pictured a color, shape or number of items. The other two cups were also covered with cards - one that matched the sample and one that did not. During this initial training period, the cup with the matching card contained two mealworms; the crows were rewarded with these food items when they chose the matching card, but they received no food when they chose the other card.

Once the crows has been trained on identity matching-to-sample, the researchers moved to the second phase of the experiment. This time, the birds were assessed with relational matching pairs of items.

These relational matching trials were arranged in such a way that neither test pairs precisely matched the sample pair, thereby eliminating control by physical identity. For example, the crows might have to choose two same-sized circles rather than two different-sized circles when the sample card displayed two same-sized squares.


What surprised the researchers was not only that the crows could correctly perform the relational matches, but that they did so spontaneously - without explicit training.
Advertisement
"That is the crux of the discovery," Wasserman says. "Honestly, if it was only by brute force that the crows showed this learning, then it would have been an impressive result. But this feat was spontaneous."

Still the researchers acknowledge that the crows' relational matching behavior did not come without some background knowledge.

"Indeed, we believe that their earlier IMTS (identity matching-to-sample) training is likely to have enabled them to grasp a broadly applicable concept of sameness that could apply to novel two-item samples and test stimuli involving only relational sameness," the researchers wrote. "Just how that remarkable transfer is accomplished represents an intriguing matter for future study."

Why are Crows Left or Right Beaked When Wielding Tools?
Known for their impressive stick-wielding abilities, New Caledonian crows show preferences when it ....

Crows may Transport Prions to Other Locations
New research indicates that crows fed on prion-infected brains from mice can transmit these ......