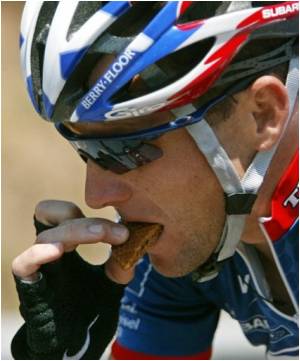 New Zealand research on cyclists suggests male athletes who skip breakfast before training could be at an advantage over those who eat first.

Associate Professor Steve Stannard says while the findings go against the conventional advice athletes are given - to eat before exercise - they also make sense.


"Training is all about putting the body under stress, not going faster," Dr Stannard says. "So by starting out with less fuel, you will reach the point where you really begin to stress the body quicker. This means you will spend longer under stress and ultimately the training will be more beneficial."


However, eating before an actual race - as opposed to training for one - remains important, says Dr Stannard, the head of the University's new School of Sport and Exercise.

"There is a large amount of evidence supporting carbohydrate ingestion before and during prolonged exercise to increase endurance performance. In essence, this means eating some carbohydrate before competing will help you go faster for longer during a race."

Researchers, led by Dr Stannard, followed two groups of novice cyclists as they trained over four weeks. One group ate a high carbohydrate breakfast before training, while the other group trained early in the morning before breakfast. Each group cycled for up to 75 minutes at a moderate intensity. Blood samples and muscle biopsies were taken from the legs of each rider before and after the experiment.

The results showed that those riders who did their training before breakfast were ultimately able to store higher levels of muscle glycogen than those who ate breakfast just before training each day. The riders who trained before breakfast also showed a bigger improvement in peak power, and ability to use oxygen (known as VO2max).

But, while the muscles of male study participants who trained without breakfast showed an improved ability to burn fat, the female cyclists improved their muscle's fat-burning capacity when they trained after breakfast rather than before.

"In an endurance event, such as road race cycling, the person who can start the race with the highest level of glycogen in their muscles, yet have the greatest ability to burn fat has a huge advantage," Dr Stannard says. "What our results suggest is that, for men at least, training before breakfast encourages the muscles to adapt in a more accelerated fashion than if training was always done after eating a high carbohydrate meal."

The reason why training before eating was not as effective for female participants is not known and requires more research, but could be related to subtle differences in fuel utilisation by muscle which seems to be associated with the sex hormones, Dr Stannard says.

"But what the research does show is that by including at least some training before breakfast, athletes -especially male - can improve their fitness faster."

The research is published in the Journal of Science and Medicine and Sport and was co-authored by Alex Buckley, Johann Edge and Martin Thompson.  Dr Edge, a former colleague of Dr Stannard's at Massey, was killed in a cycling accident in March.

"The paper is dedicated to the memory of Hans, who was widely regarded as an up and coming academic star in his chosen field of skeletal muscle metabolism," Dr Stannard says. "He will be immensely missed by his colleagues here at Massey."

American Athletes Take to Yoga
Many American athletes have taken to yoga and are happy with it.
READ MORE