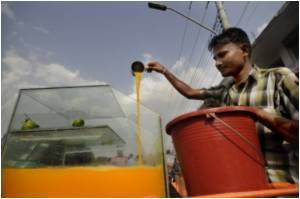 A complex range of skin-related ailments is plaguing locals as the intense heat wave sweeping across Gujarat.

Locals are having a tough time with temperatures soaring over 41 degree celsius in Ahmedabad.


Many hospitals have reported increased number of patients with skin-related problems.

Locals are trying to protect themselves from heatstroke and problems.

People prefer to remain indoors to escape the scorching sun and the hot winds of air.

"This year the temperature is very high and because of which we are facing many problems, whenever we go out we see so much heat and even if there is no sun rays then also the temperature outside is very hot," said Sheelaben, a patient.

Reportedly most of the people are suffering from dehydration, seasonal diseases, harsh sunburns, deep tanning and myriad skin and also hair problems.

"People are suffering from various skin diseases like tanning, patchy ness, pimples, etc. Tanning is a major problem in this heat and people are facing many problems," said Rajeekaben Kacheria, a cosmetologist.

To counter all these ailments, the doctors have suggested ample intake of juices, water, lemon soda and above all not to venture out in the sweltering heat.

Usually, till the onset of the monsoon, the months of May-June are the hottest in the country with the temperatures often hovering in the range of 40 to 45 degrees Celsius at many places.

However, this year the mercury shot beyond the 40 degree mark in April itself, portending extreme temperatures ahead.

Severe Heat Wave Affects Normal Life in Bhubaneswar
The scorching heat has thrown life out of normal gear in Bhubaneswar here with the weather department issuing a heat wave advisory in the region for the next 24 hours.
READ MORE

Global Warming Is Bringing Severe Heat Waves
A new report says that global warming is bringing more frequent and severe heat waves and the result will be serious for vulnerable populations.
READ MORE