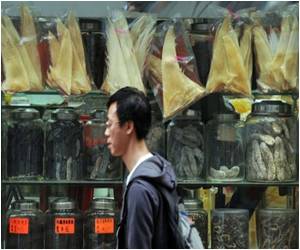 To set a good example, the Hong Kong government said it would stop serving shark fin at its official banquets.

The southern Chinese city is one of the world's biggest markets for shark fin, which is viewed by many Asians as a delicacy and is often served as a soup at expensive Chinese banquets.

Along with shark fin, bluefin tuna will also fall under the ban, which was prompted by what authorities called "conservation concerns".


"The exclusion of these... items from official menus is a start and also serves as an example of raising public education and awareness on sustainability," a government spokesman said in a press release.
Advertisement
"The government is determined to take the lead and set a good example on this front," he said.

Trade in shark fin is not regulated in Hong Kong except for three species -- basking shark, great white shark and whale shark -- where the trade is restricted under the Convention on International Trade in Endangered Species of Wild Fauna and Flora (CITES), to which Hong Kong is a signatory.

More than 70 million sharks are killed every year, with Hong Kong importing about 10,000 tonnes annually for the past decade, according to environmental group WWF. Most of those fins are then exported to mainland China.

Shark conservationists applauded the government's move saying it was a step towards ending the trade globally.

"Today's decision is another important milestone towards ending shark mortality globally," Program Manager at Hong Kong Shark Foundation Emma Kong said in a statement, adding shark conservation momentum in the city had been building for years.

"After almost a decade of advocacy in the form of petitions, protest marches, letter writing and media campaigns, the Hong Kong government has finally seen fit to do the right thing -- for which we applaud them," Alex Hofford, the executive director of Hong Kong-based marine conservation group MyOcean, told AFP.

"We hope the citizens of Hong Kong can follow suit and finally lay this abhorrent tradition to rest," Hofford said.

Reichert also said populations of Pacific bluefin had declined around 96 percent, according to a recent study.

Campaigners say the trade has left up to a third of open-water species on the brink of extinction.

They estimated there were 15,000 to 20,000 fins being laid to dry on the rooftop on Hong Kong island ahead of an anticipated surge in demand over Lunar New Year in the following month of February.

Shangri-La said it would also phase out Bluefin tuna and Chilean sea bass, which are under threat of extinction.

The city's flag-carrier Cathay Pacific Airlines in September last year followed suit, saying it was "the right thing to do" in no longer carrying unsustainably sourced shark products on its cargo flights.

In 2011, almost 80 percent of Hong Kongers said considered it socially acceptable to leave shark fin soup off the menu for a wedding banquet, a survey by a shark conservation group said.

Fight Against Shark Fin Soup Abetted by Shangri-La
Even as the campaign to protect the marine predators gains ground among Chinese consumers,luxury ......

Shark Fin Soup Could Cause Alzheimer's
The presence of high neurotoxin levels in shark fin soup pose a deadly threat to the brain health, ....