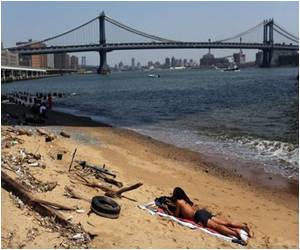 Engineers from Stanford University have now devised a new way to generate electricity from sewage, a new green energy source.

They hope that one day it will be used in places such as sewage treatment plants, or to break down organic pollutants in the "dead zones" of lakes and coastal waters where fertilizer runoff and other organic waste can deplete oxygen levels and suffocate marine life.


At the moment, however, their laboratory prototype is about the size of a D-cell battery and looks like a chemistry experiment, with two electrodes, one positive, the other negative, plunged into a bottle of wastewater.
Advertisement
Inside that murky vial, attached to the negative electrode like barnacles to a ship's hull, an unusual type of bacteria feast on particles of organic waste and produce electricity that is captured by the battery's positive electrode.

The Stanford engineers estimate that the microbial battery can extract about 30 percent of the potential energy locked in wastewater. That is roughly the same efficiency at which the best commercially available solar cells convert sunlight into electricity.

Hydrogen, Carbon Dioxide Used To Produce Electricity By Engineered Bacteria
A strain of electricity-producing bacteria that can grow using hydrogen gas as its sole electron ......

Fabric That can Conduct and Store Electricity Developed By Australian Engineers
A super strong and flexible yarn which conducts and stores electricity, and could power wearable ......