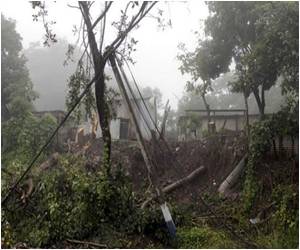 In many parts of Uttar Pradesh, severe dust storm rose on Friday leaving behind a trail of devastation and death and officials on Saturday confirmed death of more than 14 people.

Besides, over two dozen people were injured in the storm. In Lucknow and neighboring areas, eight people lost their lives, 320 hoardings were ripped apart and power transmission lines snapped, leading to power outages of more than 20 hours at many places.

Harvest, mainly of wheat which was lying in the fields has also been damaged extensively, officials informed while adding that this has added to the already cup full of woes of farmers following heavy rains and hail storm last week.


Mango harvest has also taken a beating in Kakori and Malihabad mango belts neighboring Lucknow. Heavy rainfall has been reported since Friday night in Agra, Bareilly, Sitapur and some parts of western Uttar Pradesh.
Advertisement
More such weather phenomenon are likely to occur over the weekend, the state Met department has predicted.

Regional Met director J.P. Gupta said that the dust storm was a local phenomena which had developed due to "local heating. There has been extreme heat at some places while at some places the mercury is down by few notches and this yawning gap has led to this cyclonic circulation," he added.

The Met office has predicted rainfall in some parts of the state on Saturday and Sunday.

Swine Flu Cases in Uttar Pradesh Surge to 250
In Uttar Pradesh, seven people have died due to swine flu while the total number of such cases in .....