Seventy-four People Have Died of Cholera in Nigeria 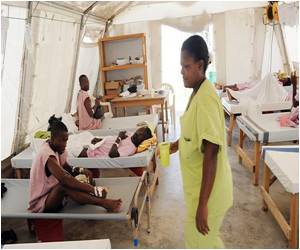 As many as 74 people have died of cholera in Nigeria, the country's health minister said Monday.

Speaking during a gathering of doctors in the capital city, Minister for Health Onyebuchi Chukwu said the death toll from the current cholera outbreaks in the West African country has risen to 74 and 373 Nigerians have been affected, Xinhua reported.

Plateau, Sokoto, Zamfara and Lagos states have recorded cases of cholera in the past weeks.


The minister urged Nigerians to take the issue of sanitation very seriously, saying what is important is that Nigerians must do everything to stop open defecation and have access to clean water. He assured the people that the government was working with the states affected by cholera outbreaks.

Cholera is an acute intestinal infection that causes severe vomiting and diarrhoea, leading to serious dehydration and can be fatal if not properly treated.

Source: IANS
Advertisement
<< Smell Coffee, Mint and Apple Whenever You Get New Email on ...
Property Tax Issue Behind Increasing Number of Divorces in ... >>