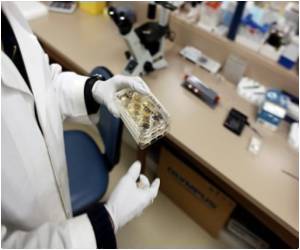 For the first time, scientists at the University of Kent have shown how the structures inside cells are regulated - a breakthrough that could have a major impact on cancer therapy development.

A team from Kent's School of Biosciences uncovered the mechanism whereby the physical properties of the internal structures within cells - known as actin filaments - are 'fine-tuned' to undertake different functions.

Cancer therapy can be significantly more effective if it targets a specific molecule in blood vessels.
Advertisement

While some of these actin filaments appear to completely stable, providing a framework for the cell, others are more dynamic, allowing the cell to respond rapidly to changes in its environment.


The researchers - PhD students Matthew Johnson and Daniel East, who were led by Dr Daniel Mulvihill - used yeast cells to mimic those in humans. They utilised a novel biology 'trick' to switch the location of molecules which bind to, and stabilise, the actin polymer and modulate the movement of molecular motors.

A luminescent nanoparticle is being created by a physicist from University of Texas at Arlington, to use in security-related radiation detection, could help in cancer therapy.
Advertisement
In this way, they uncovered the mechanism which determines the functional characteristics of actin filaments in all cells and orchestrates cellular activity. It is expected the breakthrough could have a major impact on the development of therapies for a variety of diseases, including cancer.

Resistant Gynecologic Cancers can be Treated by Targeted Cancer Therapy

Is Cancer Therapy too Targeted?