Scientists have uncovered the mystery of protein function 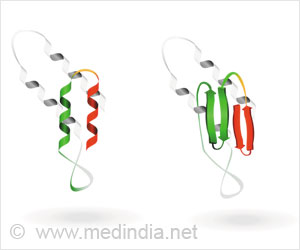 Proteins are the key elements in a human being or any other type of organism that does most of the functions and enable the body to work.

These big molecules carry out almost all processes in living organisms, including moving other molecules from one place to another, replicating DNA, conveying genetic information from genes to cells, controlling immune response, driving metabolism and building muscle.

Advertisement
‘The finding of the study is at the initial stages, if the techniques are perfected and the function of proteins is understood perfectly, it could possibly lead to the effective treatment of almost every other disease like cancers to neurological disorders. ’

Not all protein molecules are created equal, though, and some are better understood than others.


Now, a team of scientists led by a Johns Hopkins University biologist has cracked a key part of the mystery surrounding proteins that emerged as a distinct type less than 30 years ago.
Advertisement
The finding reported in the online journal eLife could eventually lead to treatments for diseases that range from cancer to neurological disorders.

Vincent Hilser, professor and chair of the Johns Hopkins Department of Biology, said it's not possible to say when this new research will translate into improved treatments, "but what is clear is that understanding how these things work is a critical step towards it."

These so-called "intrinsically disordered proteins" do not look like the more familiar type, but they make up about 40 percent of all proteins. Perhaps more important, they constitute the majority of proteins involved in the process called "transcription." That's how the instructions in genetic code are conveyed to cells and ultimately body tissues.

It is not clear exactly how errors in transcription affect human health, but it is known that these errors are involved in most cancers, Hilser said.

"It's probably going to be the case that to understand many, if not most, cancers, you're going to have to understand disorder," he said, meaning disordered proteins.

Until the early 1990s, scientists only knew of "structured" proteins, existing as unique shapes that respond when a regulator molecule binds to them, changing their shape and controlling their function. These protein molecules have been compared to origami creations folded into a particular shape.

Anything showing up in experiments that did not fit that profile was often dismissed as some problem with the experiment, or an anomalous form that was not biologically significant.

These outliers have since been recognized as a legitimate form of protein, although given a somewhat disparaging name. They don't fold up; they don't assume any unique shape at all other than strands of "spaghetti," as Hilser puts it. Hence the "disorder" in the name, as opposed to "structured" proteins and part of the mystery.

If the structure is the mark of the regulating molecule doing its work determining protein activity and function , then what to make of proteins that do not do that? What controls the activities of these shapeless strands?

The scientists, nine from Johns Hopkins and one from the University of Houston, set out to find the answer, for the questions surrounding protein functions. They chose for their study a disordered protein taken from human cells called glucocorticoid receptor, which regulates genes that control, among other functions, metabolism and immune system response.

By manipulating segments of the protein in the lab, they were able to show how one portion acts on another, and that the disordered protein creates versions of itself to act almost in place of regulator molecules that govern its activity.

The disordered protein uses an activation-repression dynamic between sections within the disordered chain to regulate its own activities and those of other proteins.

"Our work uncovered the language of how these spaghetti pieces communicate," Hilser said. "We showed that those pieces of spaghetti interact with each other sort of like attracting and repulsing magnets, creating a kind of 'tug-of-war,' and that the body can make different versions of the protein to tune which part wins the tug-of-war."

Yet to be explained, he said, is how the interactions among these proteins and the sub-sections happen and how all this can ultimately be used to treat disorders that emerge when things go awry with these molecules central to almost all life function.

Protein Function That Could Lead to Ways to Prevent Stroke Damage
One particular protein is the final executioner of events that result in the death of brain cells .....

Novel Inflammatory Protein Function Revealed
The function of a protein that dramatically influences inflammation has been described by ......