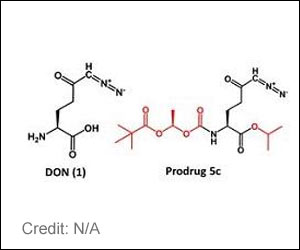 A team of scientists from Johns Hopkins Drug Discovery and Kimmel Cancer Center's Bloomberg-Kimmel Institute for Cancer Immunotherapy report have altered the structure of new drug to make it pass into the impermeable blood-brain barrier. The findings of the study which showed a tenfold delivery of the drug to the brain was compared with rest of the animals. The study results were published in the Journal of Medicinal Chemistry.

The scientists began with an experimental anti-cancer drug cultivated from bacteria found in Peruvian soil more than 70 years ago. Called 6 diazo-5-oxo L norleucine, or DON, the drug blocks the cellular use of the protein building block glutamine. On its own, DON has shrunk tumors in clinical trials of people with a variety of advanced cancers, but its damage to the gastrointestinal system, a glutton for glutamine, ultimately proved too toxic for humans, say the scientists.

Brain tumors are the abnormal growth of brain cells that may be benign or metastatic. Brain tumors account for about 2.4% of all the tumor diagnosesandare most challenging due to their critically delicate location.
Advertisement
‘New experimental cancer drug showed a tenfold better drug delivery in the brain.’
Tweet it Now

"We wondered whether we could make a safer and more tolerable form of DON by enhancing its brain penetration and limiting its exposure to the rest of the body and, thus, toxicity," says Barbara Slusher, Ph.D., professor of neurology, medicine, psychiatry, neuroscience and oncology at the Johns Hopkins University School of Medicine and director of Johns Hopkins Drug Discovery.

Glioblastoma multiforme a form of brain tumour with no curative options due to the inability to get drugs through the blood-brain barrier.
Advertisement
"A tumor uses aggressive metabolism to grow, sucking up all the surrounding nutrients, which leads to a very oxygen-poor, acidic environment that is not conducive to cancer-killing immune cells," says Powell, who is an associate director of the Bloomberg~Kimmel Institute for Cancer Immunotherapy.

Powell suspects that using glutamine-blocking drugs to target tumor metabolism could make the environment around a tumor less harsh, slow down its growth and give the immune system a chance to attack the cancer cells. "The hope is to enhance certain immunotherapy drugs by adding such glutamine antagonists," says Powell.

To alter DON, Slusher and her drug discovery team designed and synthesized various derivatives, focused on making the drug more lipid soluble, or lipophillic, a trait known to aid passage through the blood-brain barrier. Once inside the brain, the new derivatives are designed to rapidly metabolize back to DON.

"We showed that we can modify these drugs to have further specificity to target the brain and limit toxicity to the rest of the body," says Slusher. "This strategy can potentially be used to develop tailored drugs for different cancers."

The drug, propentofylline or PPF, limits the spread of glioblastoma multiforme, a common primary tumor of the brain and central nervous system by targeting a protein called TROY.
Advertisement