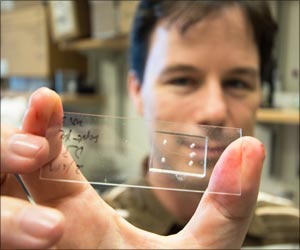 A new technology to sort human cells according to their stiffness, which might one day help doctors identify certain diseases in patients has been developed by scientists.

The new technology is being tested in a small device, about 1 inch wide by 1.5 inches long. Cells are injected into a microfluidic channel on one side of the device. As the cells move through the channel, they are forced to squeeze over a series of ridges that are fabricated at an angle to the channel. If the cells are very flexible, they will easily squeeze over the ridges and follow the fluid stream. But if the cells are stiffer, when they hit a ridge, they will slide along the angled ridge before squeezing over, causing the cells to move to one side, separating them from the softer cells.

These ridges eventually separate a single stream of cells into two streams depending on the cells' stiffness, which in some cases can be an indicator of a disease. "If you imagine a microfluidic channel that is focusing a stream of cells, you'll push the cells in different directions based on their mechanical properties," said study co-author Todd Sulchek, an assistant professor in the George W. Woodruff School of Mechanical Engineering at Georgia Tech. Sulchek specializes in studying the mechanical properties of cells.


The new research was scheduled to be published Oct. 16 in the journal PLOS ONE. The research was sponsored by the National Science Foundation. The researchers also have a patent on this technology.
Advertisement
"There are no real techniques to sort cells by stiffness right now in large numbers," said Alexander Alexeev, an assistant professor in Georgia Tech's George W. Woodruff School of Mechanical Engineering. Alexeev is an expert in fluid mechanics and a co-author on the study
A few other research groups are working on microfluidic approaches to sorting cells by stiffness, but Sulchek and Alexeev believe their technology will be quite sensitive.

"There are several microfluidic approaches, but there's not a real device yet," Alexeev said. "The main problem is how to sort cells very rapidly because if we are looking at cancer cells, there are very, very few of them. So we need to look at thousands of millions of cells to capture maybe a hundred cancer cells."

Their technology can sort cells at speeds similar to other cell sorting devices, such as a fluorescently activated cell sorter machine, which is a commonly device used in research labs. To show that their device can successfully sort cells based on stiffness, the researchers made some cells artificially soft, then labeled them with a different color so they could find them later. After running the cells through their device and analyzing the separated cells by color, they found that the artificially soft cells were separated from the other cells. Then the researchers used atomic force microscopy to probe the cells' mechanical properties to make sure they were actually different.

"We show that we separate by stiffness, not by other factors," Sulchek said. The researchers tested four different commercially available cell lines. White blood cells sort by stiffness particularly well, the researchers reported.

The research team will now work on using their device to separate cancer cells, malaria-infected cells, and sickle cells, and to sort stem cells. "We're assured the device is very sensitive to say that the soft cells are all soft, but what we don't know is whether all the disease cells are soft," Sulchek said. Aside from testing for disease, the cell stiffness sorter could also be used in as a method for purifying and enriching an undifferentiated stem cell population from the differentiated cells, which would be useful for laboratory scientists.
"This is also a useful tool for just basic research and understanding what the effect of specific disease is on cell mechanics," Alexeev said. Gonghao Wang, a PhD student in Sulchek's lab, is the first author of the study.