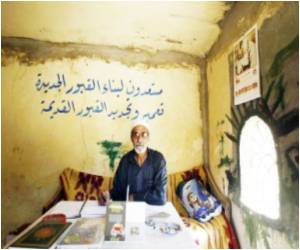 Motivated neither by malice nor by politics, the relatively poor Iraqis were trying to grab as many of the giant-sized iron frames on which the posters were displayed as possible, either to recycle or to sell on.

NGO Puts a Smoking Ban in All Polling Booths in Assam

In Assam, a leading non-profit organisation working in the field of public health has requested poll officials to prohibit smoking in all polling booths in the state during the three-phased polls starting April 7.
Advertisement

Areas targeted by the scavengers included Karamana Square as well as nearby well-known Firdos Square, where an imposing statue of Saddam Hussein was pulled down shortly after the 2003 US-led invasion.


"First, we thank God because he sent a storm to lift these heavy poster frames out of the ground," said Jaafar, who along with a friend was lugging a large iron frame from Karamana Square in plain view of police, referring to recent rain storms.

Healthcare finds just passing mention in the election manifestos of various political parties in India,
Advertisement
"Secondly, we thank all of the candidates for their generosity and for giving these frames to us, without asking for anything in return," he added, smiling sarcastically, implicitly referring to the rampant state corruption that is a regular complaint of ordinary Iraqis.

"I have got a new roof and I will use it in my garage. Without this poster frame, I would have spent a lot of money, so thank you so much."

Not far away, Abu Hazim, who like Jaafar declined to give his full name, was carting iron frames from Firdos Square, noting: "We, the poor, are the ones that benefit from this metal."

"We use it as roofing in our houses and the rest, we sell it for money. Most of the members of parliament have not lost anything from their pockets -- this is the money that they stole from the people," said Abu Hazim.

"The poor have only this small thing."

More than 9,000 candidates ran nationwide in the parliamentary elections on 277 electoral blocs, all competing for 328 parliamentary seats with more than 20 million voters casting ballots.

More candidates than in previous elections had used massive iron frames to stand up brightly coloured campaign posters on squares and streets across the capital.

The stands were to help protect the posters from windy conditions and to ensure them pride of place in the public eye.

Many poor Iraqis had been eyeing the frames for weeks, either to improve their makeshift accommodation or to sell on to willing buyers.

Such was the potential windfall from the frames that one man waiting for polling to end admitted that he had portioned off an entire neighbourhood, in agreement with rivals.

"Iron frames from Hurriyah Square to the cross road of the university are my portion -- the others have agreed, and their portion will be on the other side of the neighbourhood," said Rasheed Abboud, speaking in the capital's upscale Jadriyah district.

The scramble for the iron is a reflection of the fact that while Iraq's government revenues have surged on the back of rising oil production, many in the capital still struggle to make ends meet.

Nearly a quarter of the national population lives in poverty according to official estimates. In parts of Baghdad, the poorest Iraqis live in garbage dumps with houses made of gas cannisters and mud, UNHCR-marked tarpaulins serving as roofs.

"Some people are living inside the Green Zone and inside their estates in other countries and we are here, dying of hunger," said Anwar Ahmed, one of the men taking the iron frames, referring to the heavily-fortified complex which houses parliament and the US and British embassies.

"We have the right to do anything. We are making use of this metal. We take it to sell it," said Ahmed.

"We are not stealing -- we have the right to take the metal from the streets, because the elections are over. The new government will not help us, they are not offering us jobs -- they are using workers from Bangladesh and we are here, sitting jobless."

Aid groups in Afghanistan called for the government to ban election offices from schools and health clinics for next year's presidential vote.
Advertisement
Advertisement
This site uses cookies to deliver our services.By using our site, you acknowledge that you have read and understand our Cookie Policy, Privacy Policy, and our Terms of Use  Ok, Got it. Close
×