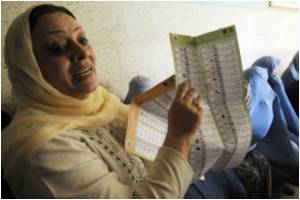 Aid groups in Afghanistan called for the government to ban election offices from schools and health clinics for next year's presidential vote. The ban was called over fears that they could be targeted by militants.

The Agency Coordinating Body for Afghan Relief and Development (ACBAR) said that many schools and clinics had been designated as voter registration centres and polling stations for the April poll to replace President Hamid Karzai.

At the last presidential election in 2009, polling booths were targeted by the Taliban and other armed groups, roadside bombs killed election staff, and abductions, illegal checkpoints and threatening "night letters" were rife.


Government officials and police also ordered people how to vote and stuffed ballot boxes with bundles of voting papers, according to independent observers.
Advertisement
"Afghan and international security forces will be involved in the protection of voting centres and the fact that the current political process is strongly contested (means that)... voting centers present a high risk of being attacked," ACBAR said in a statement.

It said that using healthcare facilities and schools as a "political space" could undermine their civilian status and drag them into an election process likely to be violent.

"We ask that this abuse of health and school facilities should under all circumstances be avoided," said the group, which has 120 NGO members ranging from Save the Children to small local organisations.

Afghanistan's election on April 5 will be the country's first ever democratic transfer of power, and a credible vote is seen as a test of 12 years of international intervention since the fall of the Taliban in 2001.

President Hamid Karzai cannot stand for a third term, and 11 candidates are vying to succeed him.