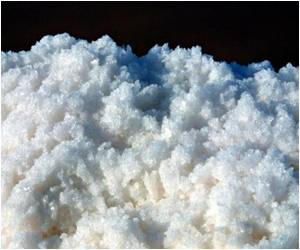 Diet with high salt content may increase the risk of autoimmune diseases like multiple sclerosis (MS), according to research.

Two of the studies showed that salt can induce the production of aggressive cells involved in autoimmune disease development in mice and humans, while a third indicated that mice on high-salt diets develop a type of disease similar to human MS.

The international teams of scientists cautioned that these are early results that warrant further investigation.


"It's premature to say: 'You shouldn't eat salt because you'll get an autoimmune disease'," said one of the study authors, Aviv Regev from the Massachusetts Institute of Technology.
Advertisement
"We're putting forth an interesting hypothesis -- a connection between salt and autoimmunity -- that must now be tested through careful epidemiological studies in humans."

In two studies in mice and human cells, scientists showed that salt boosted the development of a type of immune cell known as T helper 17, or Th17, that has been implicated in diseases like MS, psoriasis and rheumatoid arthritis.

Autoimmune diseases develop when the immune system attacks rather than protects the host.

Other researchers found they could induce more severe forms of autoimmune diseases, and at higher rates, in mice fed a diet higher in salt than others.

"It's not just salt, of course," said author Vijay Kuchroo, co-director of the Center for Infection and Immunity at the Brigham and Women's Hospital in Boston.

"But we also suspect that environmental factors -- infection, smoking and lack of sunlight and Vitamin D may play a role," Kuchroo said in a joint statement.

"Salt could be one more thing on the list of predisposing environmental factors that may promote the development of autoimmunity."

In a comment on the three companion papers, John O'Shea of the National Institute of Arthritis and Musculoskeletal and Skin Diseases in Bethesda, Maryland, and Russel Jones of McGill University in Canada, called the findings "exciting and provocative".

But they reiterated it was premature to state that salt could cause autoimmune disease.

"This work should spur investigation of tangible links between diet and autoimmune disease in people," they wrote.

"In doing so, it will be essential to conduct formal, controlled clinical trials. Fortunately, the risks of limited dietary salt intake are not great, so it is likely that several such trials will be starting soon."

Quiz on Salt in Our Food
Salt is the most important item in our food. Without salt, the food tastes bland and flavorless. It ...

'Low-Salt Diet' Not Beneficial for Caucasians
A low-salt diet which restricts the sodium intake to 1.5grams per day may not be beneficial for ......