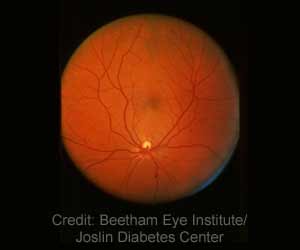 As we age, people with diabetes are more likely to develop Alzheimer's disease and other cognitive disorders than are people without diabetes. These results may open up a relatively easy method for early detection of cognitive decline in this population, providing better ways to understand, diagnose and ultimately treat the decline, said George L. King, MD, Joslin's Chief Scientific Officer and senior author on a paper about the study in the Journal of Clinical Endocrinology & Metabolism.

New Hope For Early Detection And Monitoring Of Alzheimer's Disease

A noninvasive eye scan helps in detecting key signs of Alzheimer's disease years before patients can show the symptoms of the disease.
Advertisement
‘In older people with type 1 diabetes, damage to the retina may be linked to memory problems and other cognitive conditions. ’

Previous research had demonstrated an association between proliferative diabetic retinopathy (PDR, a complication of diabetes that can severely damage eyesight) and cognitive impairment in people with type 1 diabetes.

A quick eye scan can help assess the extent of brain damage accurately in people suffering from multiple sclerosis.
Advertisement
The scientists drew on eye scans routinely gathered from patients as part of normal vision care at Joslin's Beetham Eye Institute. One set of scans was based on optical coherence tomography (OCT, a technique employing light to provide cross-sections of the retina).

A second set of scans employed OCT angiography (OCTA, an extension of OCT technology that examines blood vessels in the retina). Both types of scans are non-invasive and widely available in eye clinics in the United States, and can be performed within minutes.

The study enlisted 129 participants in the Joslin Medalist Study, which examines outcomes among people who have had type 1 diabetes for 50 years or longer. These volunteers took a series of cognitive tests that included tasks probing memory function as well as psychomotor speed (assessing the time it took to arrange objects by hand).

Strikingly, the researchers found very strong associations between performance on memory tasks and structural changes in deep blood vessel networks in the retina. "Memory is the main cognitive task that is affected in Alzheimer's disease and cognitive decline, so that was exciting," Fickweiler said.

The Joslin team also discovered strong associations between PDR and psychomotor speed. This finding reinforced earlier outcomes that had been identified among a smaller group of Joslin Medalists, and provided details about related changes in retinal structure. Additionally, the researchers saw that PDR was associated with memory performance among the larger group of Medalists.

While these results need to be confirmed in larger clinical investigations, the routine eye exams do seem to detect the cognitive changes happening in people with diabetes, said Fickweiler.

Currently, other ways to detect conditions such as Alzheimer's disease such as MRI scans are difficult and expensive. People typically are tested only when they're showing symptoms of cognitive decline and treatments at that stage generally don't offer much help.

"If you can detect the condition at an earlier stage, when they're still asymptomatic, that may benefit patients," Fickweiler said. Earlier detection also could aid the quest to develop better therapies for neurocognitive diseases.

The Joslin team plans to launch a larger prospective study to confirm the potential of eye imaging to pick up signs of cognitive decline over time. This research will include people with type 1 diabetes who are younger and haven't had the disease for as long as the Medalists. The scientists also will analyze MRI brain images and postmortem brain samples donated by Medalists.

Additionally, the investigators will look for common mechanisms that may inflict damage on brain and retina tissues, which share much of their early embryonic development pathways. Likely suspects in people with diabetes include impaired blood vessels and high or low levels of blood glucose. The autoimmunity that drives type 1 diabetes also might inflict other forms of harm, King said.

Notably, Joslin Medalists often display relatively low levels of the complications that can afflict those with long-term type 1 diabetes. For instance, almost half of Medalists don't develop advanced eye disease, and only one of the 129 Medalists in the eye-scan study may have Alzheimer's disease.

"It is possible that in the Medalists, a shared mechanism alters the progression of the early stages of retinal and brain neurodegeneration, and provides protection against both PDR and Alzheimer's disease," Fickweiler speculated.

In addition to follow-up work in type 1 diabetes, King and his team plan to perform a similar study for people with type 2 diabetes. PDR also is associated with cognitive decline in this much larger group of patients, who also get OCT and OCTA eye scans as part of their regular vision care.

Researchers have developed a new app that can turn a smartphone into a highly portable and low cost eye scanner.
Advertisement
<< Artificial Intelligence can Suggest New Ways to Use Existing...
Five Best Ways to Reduce Gastroesophageal Reflux Disease Sym... >>

Scanning the lens of the eye could spot early warning signs of type 2 diabetes and prediabetes, reveals a new study.