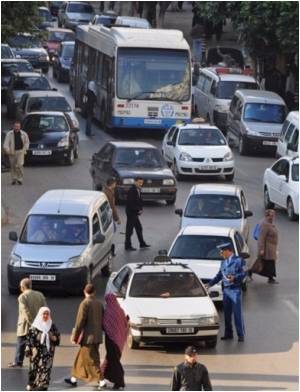 A study has deemed that Beijing and Mexico City have the worst traffic jams in the world. Here, record traffic levels take their toll on people's health, productivity and social life, a study said Wednesday.

Most of the 8,192 motorists interviewed for the IBM Commuter Pain Study in 20 cities around the world said traffic has worsened in the past three years.

Nighttime noise from passing aircraft, trains and automobiles is linked to disturbed sleep and impaired neurobehavioral performance in the morning, says a new study.
Advertisement

Beijing and Mexico City scored 99 out of 100 in IBM's commuter pain index, trailed closely by Johannesburg, Moscow and New Delhi.


Los Angeles had the worst traffic of all US cities, scoring 25 on the commuter pain scale, and along with New York and Houston, Texas had the longest commutes anywhere in the world.

Noise from Air, Road Traffic can Raise Blood Pressure Even While Sleeping

Noise at night from airport and road traffic can increase blood pressure during sleep, according to a study published Wednesday.
Advertisement
But despite their pain, Los Angeles commuters fared much better than their counterparts in Beijing, where traffic was nearly five times worse, according to the IBM survey.

Yet 48 percent of drivers surveyed in the Chinese capital said traffic had improved over the past three years, as the city expands its transportation system.

Stockholm -- with a low index score of 15 -- Melbourne and Houston had the most pain-free roadway traffic.

Moscow outshined its rivals for the longest traffic jams, averaging 2.5 hours -- the world average was one hour. Instead, in Buenos Aires, Melbourne and Stockholm, 25 percent or more commuters said they have never been stuck in traffic.

IBM blamed most commuter troubles on the failure of infrastructure to keep pace with global economic activity.

Naveem Lamba, IBM's global industry chief for intelligent transportation, said traditional solutions such as building more roads was not enough to cope with the surge of traffic in rapidly growing cities.

"Multiple solutions need to be deployed simultaneously to avoid a failure of the transportation networks," he said in a statement.

"New techniques are required that empower transportation officials to better understand and proactively manage the flow of traffic."

The survey found that only five percent of Madrid commuters would work more if commuting time could be reduced -- the low in the study -- compared to a high of 40 percent in New Delhi. The global average was 16 percent.

IBM's was based on 10 issues, including commuting time, time stuck in traffic and the traffic flow's impact on stress, anger and work.

A study has found that airplanes, which are a source of carbon dioxide emissions, are set to become a major factor in global warming in the future.
Advertisement
<< Women More Enthusiastic at the Workplace Than Men: UK Study
Kiwi Researchers Develop New Drug For Noise-Induced Hearing... >>