Revelation Of Being 'Scared of Sea' By British Silver Medalist Sailor 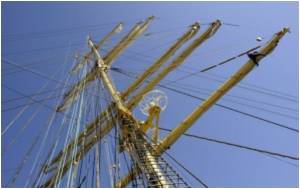 British sailor Hannah Mills has revealed that she suffers from a sea phobia. She recently won the silver medal at the London Olympics along with Saskia Clark.

Mills only began preparing for the London Games 18 months ago after teaming up with Clark, when the latter's sailing partner retired from the sport.

A new tool has come to the rescue for those suffering from common phobias that includes fear of spiders, flying and dentists.
Advertisement

The Welsh sailor has also had to deal with a phobia that would put many people off ever setting foot in a boat.


"I'm scared of the water and I hate the sea. I'd be all right if it was clear and I could see what was underneath. But it's the not knowing what's there that freaks me out," the Telegraph quoted Mills, as saying.

Divorce Phobia is Preventing Young Couples from Getting Married

Many young couples fear the ravages of divorce and are afraid of getting married, a news study has suggested.
Advertisement
The Cardiff-born sailor, who played tennis as a child but had to give it up because of knee problems, began sailing aged eight after trying it on a family holiday in Cornwall.

Mills was named UK Young Sailor of the Year in 2002 and together with Clark won the 470 class at the World Championships in Barcelona earlier this year.

There is a causal link between unconscious conflict, and the conscious symptoms experienced by people with anxiety disorders, according to a University of Michigan professor.
Advertisement
<< Wave of Marriage Proposals Sparked By 2012 Olympics
Touch Houseplants to Change Your TV Channel Soon: Researche... >>

How we respond to danger is now differently understood and the human subconscious has a bigger impact on our response than previously thought, according to research led by the University of Exeter.
Advertisement
News A-Z
A B C D E F G H I J K L M N O P Q R S T U V W X Y Z
What's New on Medindia