Resistance of Prostate Cancer to Drugs, Associated With Genetic Factors 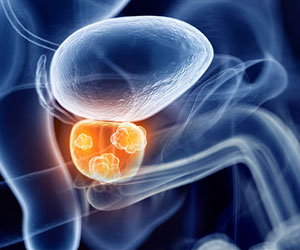 Castration-resistant prostate cancer is a deadly cancer that does not respond to standard therapies aimed to stop metastasis. A new study from Mayo Clinic Center for Individualized Medicine has identified genetic factors that indicate why these tumors resist prednisone treatment. The findings from the study may help guide health care professionals to treat castration-resistant prostate cancer on an individualized basis. While there are several FDA approved treatments and drugs to treat this type of cancer, the effects of each vary drastically across patients.

New research from Manish Kohli, M.D., principal investigator, and Liewei Wang, M.D., Ph.D., laboratory co-principal investigator, has found genetic markers that may predict resistance to the drug abiraterone acetate/prednisone, a treatment aimed at stopping progression of advanced, metastasized prostate cancer. Understanding the genetic markers of tumors and their drug resistance enables health care providers to match a therapy that is likely to succeed on the first try.

The research of Dr. Kohli and his Mayo colleagues, "A Prospective Genome-Wide Study of Prostate Cancer Metastases Reveals Association of Wnt Pathway Activation and Increased Cell Cycle Proliferation with Primary Resistance to Abiraterone Acetate-Prednisone," is published in Annals of Oncology.


"Prostate cancer is different in every patient." says Dr. Kohli. "In this groundbreaking study, we explored thousands of genetic characteristics in each tumor, and identified specific genes -- for example a set of genes called cell cycle proliferation genes --that now allow us to take an individualized approach to treatment with this drug. Our observations enhance the development of predictive biomarker-based strategies for patients with advanced castration-resistant prostate cancer."
Advertisement
The research comes from a study at Mayo Clinic between 2013 and 2015. Whole-exome DNA sequencing, which looks at all the disease-causing genes, and RNA sequencing, which looks deeply into each individual gene, were performed on metastasized tumors of 92 study participants before treatment. Those same tests were performed again after 12 weeks. Investigators in Dr. Wang's lab also attempted to grow the patient's cancer in mice from a piece of the patient's cancer tissue. Experimental drugs were then tested on cancers that grew in mice.

"The discovery of these genetic signals after such an elaborate and extensive evaluation of the patients' genetic makeup has not been previously performed," says Dr. Kohli." Such knowledge can empower physicians to better manage patients with advanced-stage, castration-resistant prostate cancer."

Prostate cancer affects approximately 1 in 7 men in the U.S. -- 10 to 20 percent of whom will develop castration-resistant prostate cancer. The average life expectancy at that advanced stage is less than 19 months.

"This research is an example of how Mayo Clinic and the Center for Individualized Medicine are transforming patient care through advanced genetic tests to address the unmet needs of our patients with advanced prostate cancer. This discovery is an additional way to customize treatment plans based on a patient's unique genetic makeup," says Keith Stewart, M.B., Ch.B., Carlson and Nelson Endowed Director of the Mayo Clinic Center for Individualized Medicine and the Vasek and Anna Maria Polak Professor of Cancer Research Division of Hematology-Oncology, Mayo Clinic.

Mayo Clinic researchers are recommending further study to determine which combination of drugs will best overcome drug resistance in patients with these genetic markers.