Researchers Explain Why the Sun's Shape is Almost Perfectly Round 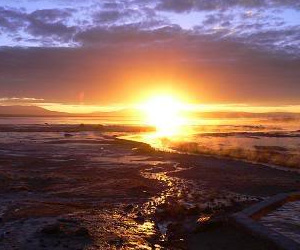 To obtain what they believe is the definitive and baffling answer about the slightly flattened surface of the sun, researchers have used the Helioseismic and Magnetic Imager (HMI). They have used these onboard the Solar Dynamics Observatory satellite.

The Sun is nearly the roundest object ever measured. If scaled to the size of a beach ball, it would be so round that the difference between the widest and narrow diameters would be much less than the width of a human hair.

Heat stroke is caused when body temperature or hyperthermia exceeds 40.6°C or 105.1°F. Heat stroke can be triggered due to overwork during summer months and lack of perspiration.
Advertisement

The Sun rotates every 28 days, and because it doesn't have a solid surface, it should be slightly flattened. This tiny flattening has been studied with many instruments for almost 50 years to learn about the Sun's rotation, especially the rotation below its surface, which we can't see directly.


Since there is no atmosphere in space to distort the solar image, they were able to use HMI's exquisite image sensitivity to measure the solar shape with unprecedented accuracy.

Protect Your Skin With the Right Sunscreen

FDA regulation for sunscreens aids the consumers in making the right and safe choice by proving a clear insight into the product specifications.
Advertisement
The results of the study conducted by Jeff Kuhn and Isabelle Scholl (Institute for Astronomy, University of Hawaii at Manoa), Rock Bush (Stanford University), and Marcelo Emilio (Universidade Estadual de Ponta Grossa, Brazil) indicate that if the Sun were shrunk to a ball one meter in diameter, its equatorial diameter would be only 17 millionths of a meter larger than the diameter through its north-south pole, which is its rotation axis.

They also found that the solar flattening is remarkably constant over time and too small to agree with that predicted from its surface rotation. This suggests that other subsurface forces, like solar magnetism or turbulence, may be a more powerful influence than expected.

"For years we've believed our fluctuating measurements were telling us that the Sun varies, but these new results say something different. While just about everything else in the Sun changes along with its 11-year sunspot cycle, the shape doesn't," Kuhn said.

The study has been recently published in Science Express.

In order to protect your skin against the damaging effects of sun's harmful radiations, sunscreen should be used on the uncovered parts of the body. Sunscreen forms a protective covering on the skin.
Advertisement
<< Smartphone App can Sense When You are Stressed
Researchers Explain How 'Superager' Brains Look and Act Dec... >>

How to Choose the Best Eczema-Friendly Moisturizer for Children?
View all
News Archive
News Resource
News Category
Can Dogs (as Pets) Help Reduce the Risk of Inflammatory Bowel Diseases? Playing Video Games may be Beneficial for LGBTQ+ Youth Monkeypox Doesn't Spread Easily by Air Like COVID, Says US CDC Treating Monkeypox With Antiviral Drugs Might be Effective Corneal Cells Help the Eyes to Protect Against Infection
More News
Sign up for Wellness Consult a Doctor Sign up for Selfcare