Research Says US Troops Exposed to Polluted Air in Iraq 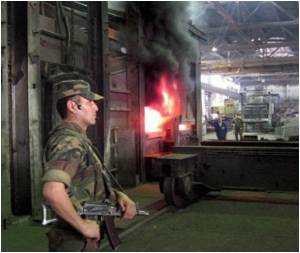 Scientists reported at the 241st National Meeting of the American Chemical Society that military personnel and contractors stationed in Iraq risk not only enemy gunfire, suicide bombers, and roadside bombs, but the very air they breathe often is polluted with dust and other particles of a size and composition that could pose immediate and long-term health threats.

Their ongoing study, begun in 2008, indicates that personnel in Iraq often breathe air polluted with the most worrisome kind of dust particles  fine particles, or "particulate matter," that lodge deep inside the lungs. It is the first long-term study of the situation, with previous studies lasting less than a week.


Bell explained that there is an important distinction between the familiar coarse particles that people typically associate with dust and the invisible fine and ultra-fine particles that are the source of most concern about particulate air pollution.
Advertisement
"Coarse particles are large enough to get trapped in the hair-like fibers that line the nasal passages and the trachea preventing them from entering the lungs," she said. "Fine and ultra fine particles are so small that they bypass the body's natural defenses. When we take a breath, they travel into the deepest part of the lung where oxygen exchange takes place."

Chronic exposure to such fine particulate matter has been linked with a variety of health problems, said Bell, who is with the University of Alaska, Fairbanks. Those include increased hospital admissions, premature death among people with heart and lung disease, an increased incidence of cardiovascular disease, and chronic respiratory diseases in children.

Bell cited two main sources of the particles  nature and human activity. Iraq has about two major dust storms a month, with the typical event involving dust and sand whipped up and driven across the landscape by winds that reach 60 miles per hour.

The terrible storms can last for days, with dust seeping through tightly sealed doors and windows and into vehicles and buildings. Those particles contain natural silicates, sulfates, and other minerals that can cause lung damage.

"We are especially concerned about fine airborne particles that originate from motor vehicles, factories, open burning of trash in pits, and other sources," Bell said. Iraq does not enforce air pollution controls, and domestic motor vehicles burn the leaded gasoline was phased out in the United States in the mid-1990s. Those particulates contain potentially toxic heavy metals like lead, arsenic, mercury, and cadmium, she noted. Some of the particulates start out as aerosols, droplets of liquid from automobile tailpipes, for instance. The liquid evaporates, leaving invisible particles of lead and other material that can float for days in the air.

Bell noted that soldiers generally are in excellent health and most probably would not experience any immediate health effects. Some, however, have developed chronic coughs related to the dust. In addition, there is no way of knowing what long-term health effects, if any, may result from troops breathing the dust-laden air.
Source: Eurekalert
Advertisement
<< Andrew Lloyd-Webber Rendered Impotent After Prostate Surger...
Possible Clues to Tamoxifen Resistance in Breast Cancer Pat... >>

Turmeric Powder - Health Benefits, Uses & Side Effects The Essence of Yoga Iron Intake Calculator Drug - Food Interactions Noscaphene (Noscapine) Find a Hospital Color Blindness Calculator How to Reduce School Bag Weight - Simple Tips Hearing Loss Calculator Loram (2 mg) (Lorazepam)
This site uses cookies to deliver our services.By using our site, you acknowledge that you have read and understand our Cookie Policy, Privacy Policy, and our Terms of Use  Ok, Got it. Close
×