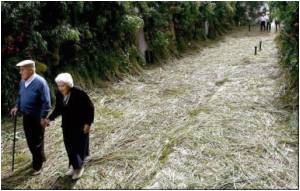 Spouses have a much greater impact on their partner's health than previously known, a study of older married couples that gives new meaning to the matrimonial adage "for better or worse" has said.

The study, published in the current issue of the American Psychological Association's journal Health Psychology, finds strong associations between the physical and emotional health of older married couples - and provides important new information on the psychological toll of physical limitations in old age.

Researchers from the University of British Columbia and Pennsylvania State University tracked the emotional and physical histories of more than 1,700 older couples over a 15-year period, using data from a major U.S. survey. Participants ranged in age from 76 to 90 and many had been married for more than 40 years.


In individuals and couples, the researchers found a strong relationship between "depressive symptoms" (unhappiness, loneliness and restlessness) and "functional limitations" - the physical inability to perform such basic tasks as climbing stairs, picking up objects, cooking and shopping. While previous studies have linked physical and emotional health in individuals, this is the first study to show the phenomenon in couples.

People walk for many reasons ranging from pleasure to mental relaxation, finding solitude or for exercise.
Advertisement
"This study shows how important marital relationships can be in determining old age health," says lead author Prof. Christiane Hoppmann of UBC's Dept. of Psychology. "In addition, we show that many of the associations between functional limitations and depressive symptoms that have previously been found in individuals are in fact related to spouses."

"When people are depressed, they tend to want to stay at home - but that causes a spouse to stay home more too," says Hoppmann. "That's a problem, because when older adults stop being active - going for walks, socializing, shopping - they risk losing that functional ability. It's that old saying, 'use it or lose it.'"

"These findings help to illuminate the often vicious cycle between depressive symptoms and our physical abilities," Hoppmann adds, noting that associations remained after controlling for individual (age, education, cognition) and spousal covariates (marriage duration, number of children) and did not differ between women and men.

Surprisingly, the researchers found that the relationship between depressive symptoms were slightly stronger in couples than some individuals, suggesting that a spouse's physical or emotional health can have a greater impact on their partner's health than their own in some cases.

"Being married for a long time is a very specific situation, it really ties your lives together," says Hoppmann, whose previous research has explored happiness in older couples. "These findings show just how interdependent, emotionally and physically, long-term couples can become."

Hoppmann says the findings point towards a greater need for holistic healthcare approaches. "This interdependence suggests that we cannot simply focus on individual patients, while disregarding the major impacts their illnesses can have on the people in their lives," she says, noting studies have shown caregivers to be at a greater risk for mental and physical health problems.

The researchers - which include Anita Hibbert, a graduate student in UBC Dept. of Psychology, and Prof. Denis Gerstorf of Pennsylvania State University - say further studies are required to determine whether these spousal associations are specific to long-term married couples and whether they generalize to aging Baby Boomers who enter old age with more diverse relationship histories, including divorces and remarriages.

Health screening in women between 40 and 60 years helps to diagnose health issues in the early stages when they can be controlled. This ensures a more comfortable old age.
Advertisement
<< Glenoid Rim Osseous Lesions Accurately Identified by MDCT A...
Private Market for Tuberculosis Drugs >>

More News on:
Flowers And What They Mean To Us Health Insurance - India Emotional Healing