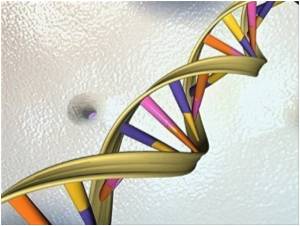 New mathematical modeling by scientists at Harvard University, Johns Hopkins University, and other institutions says that individual cancer-causing mutations have a minute effect on tumor growth, increasing the rate of cell division by just 0.4 percent on average.

Their research, appearing this week in the Proceedings of the National Academy of Sciences, reinforces that cancer is the culmination of many accumulated mutations. It also highlights the fundamental heterogeneity and randomness of many cancers, consistent with the observations of epidemiologists and clinicians.


"This work suggests that significant tumor growth probably requires the slow and steady accumulation of multiple mutations in a cell over a number of years," says lead author Ivana Bozic, a doctoral student in Harvard's Department of Mathematics and Program for Evolutionary Dynamics. "It also helps explain why so many cancer-driving mutations are needed to form an advanced malignancy within the lifetime of an individual."


All of our cells undergo regular division and death, processes that ordinarily balance out each other. In cancer this balance is broken, leading to invasive tumors that crowd out healthy cells and spread in the body.

"While emerging data from the sequencing of cancer genomes are illuminating, their reconciliation with epidemiological and clinical observations poses a major challenge," Bozic says. "Our novel mathematical model begins to address this disconnect."

Bozic's work adds to scientists' recent efforts to differentiate between "driver" and "passenger" mutations in tumors. Researchers have found that most solid tumors contain 40 to 100 mutations in coding genes, but that on average only 5 to 15 of these actually drive tumor growth. The remainder are simply along for the ride: associated with driver mutations, but not benefiting the tumor.

Tumors begin growing with the first mutation that provides an advantage over other cells, allowing them to grow ever-so-slightly faster than their neighbors. But as these driver mutations slowly accumulate in a given cell, the effect is akin to the accelerating growth of savings through compound interest: Increasingly rapid cell division feeds the ever-faster addition of more driver mutations.

Bozic's work hints that the time elapsed between driver mutations in a nascent tumor may be key to ultimate outcomes.

These predictions are consistent with clinical observations that it generally takes 30 or more years for human cancers to develop from initiated cells. Bozic and colleagues also verified the accuracy of their model by testing against clinical data from two well-studied tumors, glioblastoma multiforme and pancreatic adenocarcinoma.

In addition to clarifying the advantage bestowed by each driver mutation, Bozic and colleagues provide a formula for estimating the number of these in a given tumor.

"Needless to say, figuring out which mutations, and how many mutations, are drivers of cancer is very important in developing effective therapies," she says. "We hope our work will help drive new lines of research into future treatments."