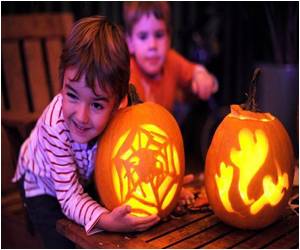 Young children can eat bags of Halloween candy and feel fine the next day. However, adults who experience all sorts of agony following the same junk food binge. Have you ever wondered why this happens? Evolution and a gene called Foxo may be to blame. Working in fruit flies, scientists at the Buck Institute have identified a mechanism that helps the flies adapt to changes in diet when they're young; they've discovered that same mechanism gets misregulated as the flies age, disrupting metabolic homeostasis, or balance.

In a study appearing in Cell Reports, researchers focus on the function of the Foxo gene in the intestines of fruit flies. Foxo is widely expressed throughout the body (both in flies and in humans), particularly in muscle, the liver and pancreas - and can regulate many aspects of metabolism in response to insulin signaling. Lead author Jason Karpac, PhD, Assistant Research Professor at the Buck, says when young animals experience a change in diet, insulin signaling gets repressed, which turns on Foxo. "In normal young animals Foxo turns on and off quite easily, allowing for a seamless adjustment to changes in diet," said Karpac. "The process is evolutionarily conserved, it protects young animals and helps guarantee their survival," he said.

US Shops Pulled Off Halloween Costume Teeth Amid Lead Fears

A US retail outlet on Tuesday pulled hundreds of sets of Halloween costume teeth from sale amid fears they could contain excessive levels of lead.
Advertisement

But Karpac says as the animals age, Foxo stops responding to insulin signaling (not a good thing for non-youngsters who crave that Halloween candy). "In the flies Foxo gets chronically turned on, which disrupts lipid metabolism. The process reflects the development of a general inflammatory condition in the aging gut."


"It has been proposed that our modern high-sugar/high fat diets can lead to misregulation of evolutionarily conserved dietary responses," said Buck Institute faculty Heinrich Jasper, PhD, lead scientist on the study. "That may be the case. Metabolism is a very complex process -- lots of things can go wrong which increases stress in the animals." Jasper says age-related loss of metabolic balance is a risk factor for many human pathologies. The goal is to identify age-related changes in metabolic pathways with the hope of being able to intervene. "Our aim is to develop treatments that would preserve well-functioning metabolism as part of healthy aging - something that would likely not ever include indulging in candy binges."

Dentist Offers to Buy Back Leftover Halloween Candy from Kids

A dentist in Ohio, United States, has offered to buy out all of the excess candy leftover after Halloween in order to make sure that the kids will not eat it themselves.
Advertisement
<< Quality Of Health Care Improved and Costs Reduced By Neuros...
Increased Production of ROS Linked To Bone Loss >>