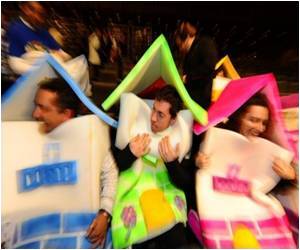 There was great news on Thursday as the world's richest lottery showered a 2.5-billion-euro ($3.3 billion) bonanza of prizes on crisis-hit Spaniards in an annual draw of "El Gordo" or "The Fat One".

The jackpot went to number 58268, which is split into a total of 1,800 "decimo" tickets each paying out 400,000 euros. Thousands of other tickets offered smaller winnings.

Spaniards Make a Beeline For World's Most Valuable Lottery

Spaniards are making a beeline to try their luck for the world's richest lottery draw on Thursday.
Advertisement

The jackpot number was sold in the small town of Granen, population 2,000, in the area of Huesca in northeastern Spain.


"I was in bed and a friend called and said the winning number was in Huesca, ending in 8," said Eleuterio Sanchez, a pensioner from near Salamanca who bought tickets for himself and friends while in Huesca.

Christmas Eve is the luckiest day of the year for winning the lottery, the National Lottery has claimed.
Advertisement
"I put on the TV, the number is 58268 and I realise that it is our number. I still cannot believe it," he told national radio RNE.

Pupils from former Madrid orphanage San Ildefenso sang out the winning numbers plucked from a huge globe, an event played to bars and homes across the country on television.

The vast number of prizes meant the children were only half way through the task nearly three hours after the colourful ceremony began in Madrid's Palacio de los Congresos convention centre.

At the draw, many people dressed up to celebrate the occasion.

Carmelo Pradas, a 36-year-old Madrid resident, who paid for a house based on the architect's plans but never saw it built, came dressed in polystyrene headgear shaped as a white and red house.

"It represents a lot, most of all the dream, no? Let's see if we can win something and start to pay for our homes," said Pradas, who claimed to have won 100,000 euros himself three years ago.

Another man, dressed as Bugs Bunny, 44-year-old Lenin Vascones from Ecuador who has spent 12 years in Spain, said the atmosphere at the draw was "incredible".

"We all think we are going to win some kind of prize, as much those in here as those outside," he said. "I have come as Bugs Bunny, the rabbit of luck, to spread dreams, much hope and many prizes."

Wearing a red dress and make-up to look like one of Spain's wealthiest women, the Duchess of Alba, 78-year-old man Enrique Vilches de Cerebros said he was a regular at the draw.

"I come every year, and I come like this," he said.

Undeterred by -- or perhaps because of -- a 21.5-percent jobless rate and the prospect of recession, four out of every five Spaniards were estimated to have spent money on a ticket for the lottery.

The lottery said on Thursday it had sold 2.68 billion euros in tickets by its preliminary estimates. An official confirmed that the value of the prizes on offer amounted to 2.52 billion euros.

The sales, well below the national lottery's declared hopes of raking in 3.6 billion euros this year, were down 0.49 percent from last year -- a sign perhaps of the grinding economic crisis forcing wallets to close.

According to Spain's federation of independent consumers and users, Spanish households will spend an average 560 euros on Christmas -- 114 euros less than last year.

"Consumption is fragile, frugal and tired," said a report by the Spanish business school ESADE, which predicted a 40-percent decline in Christmas spending.

"But we will always keep some room for the little pleasures," said the report's author, Gerard Costa.

Spain's outgoing Socialist government had planned to sell a 30-percent stake in the lucrative lottery to rake in up to 7.5 billion euros ($10 billion) for the state's depleted coffers.

But the government abandoned the sale in September, blaming plunging markets that would have slashed the sale price.

Spain traces its fascination with the lottery back to the creation of the royal lottery in 1763, which used profits for social causes such as hospitals. The national lottery held its first draw in 1812.

Source: AFP
Advertisement
<< Top YouTube Videos in 2011: Pets, Songs and Babies
Brazilian Conjoined Twins Will Not Have Surgery for Now >>