Spaniards Make a Beeline For World's Most Valuable Lottery 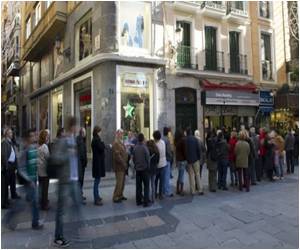 Spaniards are making a beeline to try their luck for the world's richest lottery draw on Thursday.

Undeterred by a 21.5-percent jobless rate and the prospect of recession, four out of every five Spaniards are expected to spend money on a ticket to a lottery known as "El Gordo", or the "Fat One".

Long queues snaked through the streets as people took a chance to dream of an escape from the economic crisis, each person buying an average of more than 60 euros' worth of tickets.


In Madrid's main artery, the Gran Via, many waited for tickets at a small kiosk.

"I am spending more than last year, 100 euros, and I am sharing the tickets with my friends and family," said a 48-year-old office worker, Victoria.

See What a Lottery can Get You  A Baby

A lottery is being launched this month by the fertility charity 'To Hatch', which will be a blessing to aspiring parents with a potential of winning an IVF treatment.
Advertisement
"Some of them are having a very tough time financially and I want us to win," she said.

A tradition that dates back nearly two centuries, "El Gordo" is an engrained Christmas ritual.

Family, friends and colleagues can play the same number and share the gains if they are lucky on December 22, when pupils from former Madrid orphanage San Ildefenso sing out the numbers on national television.

At Madrid's Dona Manolita lottery ticket shop, which is famed for having sold the winning number several times, superstitious players are prepared to wait for hours for a ticket.

"And they say Spain is in a crisis," a passer-by could be heard muttering as he struggled to get past the huge queue.

Spaniards' attachment to "El Gordo" allows the national lottery to rake in a fortune each year, of which 70 percent is shared out in prizes.

It makes the draw one of the world's most generous, said Juan Antonio Gallardo, sales director of the national lottery.

"The Christmas lottery is written into Spaniards' DNA. No other lottery in the world sells so much," Gallardo said.

"I am spending much less than last year. I am looking for practical gifts," said 52-year-old Maria Jose Perez, with a shopping bag stuffed with pyjamas and sports shoes for her 16-year-old daughter.

According to Spain's federation of independent consumers and users, Spanish households will spend an average 560 euros on Christmas -- 114 euros less than last year.

"Consumption is fragile, frugal and tired," said a report by the Spanish business school ESADE, which predicted a 40-percent decline in Christmas spending.

"But we will always keep some room for the little pleasures," said the report's author, Gerard Costa.

Spain's outgoing Socialist government had planned to sell a 30-percent stake in the lucrative lottery to rake in up to 7.5 billion euros ($10 billion) for the state's depleted coffers.

But the government abandoned the sale in September, blaming plunging markets that would have slashed the sale price.

A Lottery With a Difference

Richard Desmond, media mogul, owner of the Daily Express and OK! magazine, has launched a new lottery game to raise more than £50 million a year for health charities.
Advertisement
<< Video Chats Score Higher on Honesty as Compared to Texting
Dalit Millionaires May be an Inspiration to Many >>