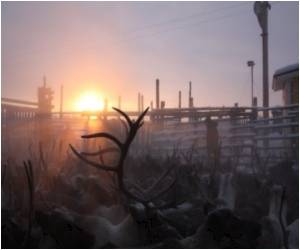 Researchers have discovered that the eyes of Arctic reindeer change colour through the seasons from gold to blue. Adapting to extreme changes of light levels in their environment and it helps them detect predators.

The Biotechnology and Biological Sciences Research Council (BBSRC) funded team from UCL (University College London), and the University of Tromsø, Norway, showed that the colour change helps reindeer to see better in the continuous daylight of summer and continuous darkness of Arctic winters, by changing the sensitivity of the retina to light.

Arctic reindeer, like many animals, have a layer of tissue in the eye called the tapetum lucidum (TL) which lies behind the retina and reflects light back through it to enhance night vision.


By changing its colour the TL reflects different wavelengths of light. In the bright light of summer the TL in Arctic reindeer is gold, similar to many other mammals, which reflects most light back directly through the retina.
Advertisement
However by winter it has changed to a deep blue which reflects less light out of the eye.

This change scatters more light through photoreceptors at the back of the eye, increasing the sensitivity of the retina in response to the limited winter light

The team believes this would be an advantage in the prolonged murk of winter, allowing reindeer to more easily detect moving predators and forage.

Lead researcher Professor Glen Jeffery from UCL, said: "This is the first time a colour change of this kind has been shown in mammals. By changing the colour of the TL in the eye reindeer have flexibility to cope better with the extreme differences between light levels in their habitat between seasons.

"This gives them an advantage when it comes to spotting predators, which could save their lives."

The colour change may be caused by pressure within the eyes. In winter pressure in the reindeers' eyes is increased, probably caused by permanent pupil dilation, which prevents fluid in the eyeball from draining naturally. This compresses the TL, reducing the space between collagen in the tissue and thus reflecting the shorter wavelengths of the blue light common in Arctic winters.

Previous work from Professor Jeffery and Norwegian colleagues from Tromso had shown that Arctic reindeer eyes can also see ultraviolet, which is abundant in Arctic light but invisible to humans, and that they use this to find food and see predators.

The blue reflection from the winter eye is likely to favour ultra-violet sensitivity.

Source: Eurekalert
Advertisement
<< Have Jet Lag? Worry No More! A 'VIP' Molecule Comes To Your...
SARS-Like Viruses can Jump from Chinese Bats to Humans: Stu... >>

Drip, Drip of Global Warming Spells Change in Northern Russia
It is summer in this reindeer-herding village in northern Russia and with not an iceberg in sight, ....

Reindeer Made from Diseased Grass Seized by Customs in US
Custom officials at the Los Angeles airport revealed that they have seized two Christmas reindeers ....

All Eyes on Aloe Vera as the Most Happening Health Drink
Aloe vera juice is now on top of the charts for its immense health benefits and may have beaten ......

Eyes may Now be Immune to Cataract
Cataract may now be prevented by detecting the activation mechanism of a protective protein that ......